If art aims to capture those childlike epiphanies we all had after
discovering something new about the world, then the best and mostenduring
music comes from somewhere near that place. When a song
captures in just three-and-a half minutes, that feeling of awe
at everything, then the music - the art - has done its job. It is this
“vital” place MUTEMATH needed find again. And they needed to
find it on their own. The greatest gift to MUTEMATH might just be
that this time out, there is no label, there was no management, no
producer. There was no "executive opinion" before the music was
fully formed.
“You want to always rediscover the reason you started doing this in
the first place,” says MUTEMATH’s singer and primary songwriter
Paul Meany. “This album is the one we’ve been dying to make all
along. We found the album that is right for this band and for this
band now.”
"We knew we had to self-produce this one," says Darren King, the
band's drummer. "This was an album for us that couldn't happen
properly unless we were willing to roll up our sleeves and dive into
all of the creation and sculpting that comes with bringing an album
from its inception to the very end. It was really important for us to
give ourselves a chance to find the sounds and songs that represent
where we are right now."

“Now” is a word that comes up again and again when speaking with
the four members of MUTEMATH. Now, if you ask any one of them,
is precisely where they’ve been reaching for all along.
"I feel it's a rebirth, for sure", says Roy Mitchell-Cárdenas, the band’s
guitarist, and most-often bassist. “I'm extremely excited and proud of
how Vitals came out. It's some of our best songwriting. We're really
shooting for a higher level with this record.”
But with MUTEMATH, this genuine all-or-nothing approach is so
abundant everywhere on this, the band’s fourth full-length, that even
a newcomer to the band will sense the urgency and the high stakes.
You don’t even have to take their word for it. You can hear it in every
single note of the songs they’ve made.
Nothing has been particularly easy on the band these past four years
since 2011’s Odd Soul. They parted ways with their label, they
changed management, and replaced a band member. Add to that the
marriages, births, deaths, and an eventual panic attack that had
Meany hiding in the bathroom of his own home as his wife and
newborn daughter slept. Thankfully, that night led to a song instead
of a hospital visit.
Meany sings above thick, oceanic synth swells of “Composed”
sounding every bit like the undulating undertow he fought off that
evening to swim and find the far shore: “I have said to myself in a
mirror’s company/Who’s that panicked stranger on his knees?” He
arrives at gratitude and awareness for the thing’s he has and pledges,
finally, to keep moving forward: “You keep my head composed/You
keep my head afloat.”
Whether he is addressing his wife and daughter, or the music that
has provided him his life’s purpose for so many years (or all three)
the evidence of triumph is all over Vitals, an album of stadium-sized
hooks designed to reach rafters, yet delivered from deep within the
smallest caverns of this band’s very soul.
“I feel completely drained and completely relieved,” Meany says,
with Vitals completed and on its way out into the world. “It’s an extremely rewarding experience. We don’t take this lightly and I
don’t think we’re very flippant with what it means for the people that
want to hear this music. We try to deliver our best. We put our all
into it. And even though this record takes a chance for us, it stays
true to where and why we started”.
Everyone in the band agrees that Vitals became an album the day
they wrote “Monument.” It’s a song that rejoices in the present,
refusing to wait for something to be gone in order to celebrate it. It is
the center that holds this ambitious collection together.
“A monument usually signifies a memorialization for what is no
more,” Meany explains. “This song is about taking control of the
moments we still have, while we still have them together. The threat
of an ending is nothing to be afraid of, but something that can be
turned into beauty and serve as a vibrant means to keep moving
forward.”
MUTEMATH’s Vitals is the sound of a band reborn, rediscovering
just why they must make music by making it for themselves, above
and beyond the interference of anyone (or anything) else. A
collection of songs that would not exist if it were not for the four
members of the band demanding only the best of themselves so that
what they deliver to the world isn’t just more noise, but something
that does nothing less than find a certain harmony in the world and
in themselves.
The only thing left is for you to hear it, knowing that you provide the
final piece that completes this long labor of struggle and eventual
triumph. All art is a gift. Vitals by MUTEMATH is for you,
me, everyone. This time out, the band is unafraid, refusing to hide
behind unnecessary subtleties and striving for that universal chord
that resides in us all. Sometimes it takes a decade. Sometimes it never
happens. For MUTEMATH, it happens now. 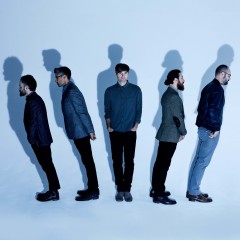 That's all we have for MUTEMATH! Check out their upcoming shows