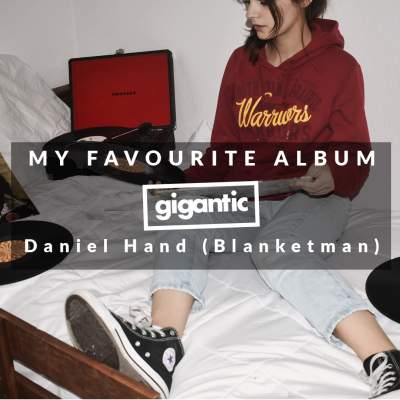 Everyone loves good music, and every week we ask vital musicians and key figures in the industry about to talk about the records that inspire them. The latest edition of My Favourite Album features Daniel Hand, lead guitarist of rising stars Blanketman!

Formed a little over a year ago, Manchester based Blanketman have already found fans in the camps of such tastemakers as DIY, Dork and CLASH who are quick to sing the praises of their unique fusion of sardonic post punk and anthemic indie pop. Their arrival was announced with the release of single “Taking You With Me” which gave listeners their first encounter with their energetic sound and bright melodies, drawing comparisons with the best bands from the Britpop years.

This month sees them drop their debut EP National Trust. Recorded with producer Luke Smith (LIFE, Foals), the upcoming seven-track record includes their sardonic surf song “Beach Body” plus singles “Harold” and “Leave The South” which both celebrate the culture, lifestyle and attitude and that can only be found in the North.

National Trust is released on March 19 via [PIAS] Recording. CLICK HERE to pre-order your copy!

When Did You First Hear It?

I must have been about fifteen when I first stumbled across Country Teasers. I think I was trawling through YouTube and the algorithms must have led me to them. It’s a banal way to discover new music but kind of inevitable in this day and age. The song I first heard was “Golden Apples”, their ‘hit’ if you like. I was instantly hooked by the spidery and grindingly repetitive guitar riff. It was hauntingly beautiful yet lyrically absurd and I played it on a loop for ages before delving into their (manageable) discography. It was easy to know where to start with the Teasers because they don’t have loads of records. It can be daunting when you discover a new band and they have a million albums and you’ve got no idea where to start, but this wasn’t the case with them.

I could just as easily have picked Satan Is Real Again from 1996 or Sleaford Mod’s Divide and Exit or anything by The Fall from the early 80s, but I suppose Destroy All Human Life marked a shift in my listening habits. I was listening to bands that I read about in the NME before I discovered Country Teasers. Stuff like Eagulls and Parquet Courts. Fidlar were a big one for me as well; I still think their early stuff is great. I even fell for the quasi-loutish bravado of Palma Violets for a bit. Still hated all the kids who went to their gigs though, even then.

I guess this album opened my eyes up to the more leftfield side of guitar music and got me interested in stuff of a similar ilk. Swell Maps, This Heat etc.  When I was old enough to start going to gigs in London, me and my friend Drew would try and see The Rebel (Teaser’s singer Ben Waller’s solo alias) whenever we could, mainly at The Windmill. Wallers never disappoints live and is always on a pretty eclectic bill. Seeing him alongside The Pheromoans and Spray Paint was a pleasure - two bands that share his DIY spirit.

“Richie is so weak that he almost can’t be seen/Eck is tall and skinny/Like a string of runner beans/Simon can’t walk properly/He has trays instead of feet/And Alan’s nose is long and hooked/Like John-Luc’s long hooked beak/But I am the perfect image of mankind/Made by God to remind him of his son.” These lyrics from “Golden Apples” are just a scathing attack on the imperfections of his bandmates, strung out in his signature drawl and deadpan delivery. I love the fact that a lot of Country Teasers lyrics appear to be band in-jokes. It feels as if you’re eavesdropping on some schoolyard teasing with Wallers as ringleader in “Golden Apples”. A somewhat unpleasant, but albeit it harmless, laugh at your mates’ physical foibles. Wallers tends to assume the identity of unsavoury characters with extremely objectionable views in his songs. I don’t think it’s done with the intention to try and shock or provoke the listener, but perhaps more to unsettle and make you think, ‘fuck, some people actually have these views!’ It’s still pertinent; bigotry doesn’t seem to be going away.

“David I Hope You Don’t mind” is a strong contender for best song on the album. It’s a departure from the acerbic lyricism of the rest of Destroy All Human Life and is probably as close to a (God forbid) love song as the Teasers ever got. The song is Wallers’ heartfelt address to Datblygu’s David Edwards whose spiral into alcoholism and bad health caused him to stop making music: “David you don’t do much singing these days/And your letters all say the Same thing/The days melt into each other/With the pills you’re currently taking.” Although lyrically not the norm for the Teasers, the wonky guitars and slightly menacing undercurrent in general on “David I Hope You Don’t Mind” confirms it as a tune that’s about as Country Teasers as the Country Teasers ever got.