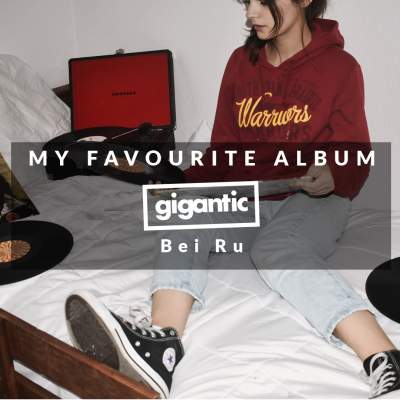 Joining Gigantic for another edition of My Favourite Album is internationally renowned producer and multi-instrumentalist Bei Ru!

Los Angeles based Bei Ru playfully blurs genres and combines live instrumentation to infuse electronica bits with his love of jazz, soul, funk and the sounds from his Armenian heritage to create a fresh feel totally unique to him. Critics and fans went wild for debut album ‘Little Armenia (L.A.)’ which was created entirely using Armenian music samples and the passion has remained high amongst his growing number of avid listeners with the release of subsequent records ‘Saturday Night at the Magic Lamp’ and ‘L.A. Zooo’.

This year has been particularly prolific for the producer, seeing the release of not one but two albums! ‘Pomegranate Juice’ was made available in March and now he drops his latest LP ‘Custom Made Life’.

Produced, mixed and recorded almost entirely single handily; ‘Custom Made Life’ marks a true creative high for Bei Ru who has captured the sunkissed West Coast experience then injected them into fourteen lofi house and hip hop tracks that are awash with chilled vibes.

The essential record includes contributions from a wide range of stars such as Jimetta Rose, Peyton, Roc Marciano – make sure you check out awesome single ‘How To Let Go Of Bad Vibes’ which features Seven Davis Jr.! CLICK HERE to grab your copy of ‘Custom Made Life’.

‘The Black Saint and the Sinner Lady’ – Charles Mingus

I saw it on the wall in the Jazz section at Amoeba Music in Hollywood some years back when I started to really get into Jazz (albeit more fusion type stuff). I wasn't familiar with Mingus' music at the time, but the cover drew me in, so I decided to gamble on it and it became one of my favourite things to listen to in any genre.

It really runs the gamut of emotion, but tends to sway more towards a bittersweet tone, so I'm cautious as to when I listen to it because it really takes me to a certain place as far as mood. It's an incredibly powerful album. It's one of those records that give you goosebumps every time you play it, no matter how many times you've heard it, and I can attest to that. Around the time when I bought it, I'd usually steer clear of Jazz records that didn't have some Fender Rhodes piano or synthesizers on there, and would also usually avoid anything pre-late 60s, but this one was so undeniably good that it eventually opened me up to a lot of other Jazz artists and albums that I'd have otherwise ignored.

‘Track C - Group Dancers’: So Mingus, who was a virtuoso bass player, also played piano on this album. This song starts with a piano solo of his which is so fucking good that I couldn't do it justice by trying to describe it with simple adjectives. Up until hearing this song, I found piano solos utterly boring and never bothered seeking them out unless it was a Fender Rhodes. This one really shook me up though, and gave me a whole new perspective on music and appreciation for what you can achieve with just one instrument. Now, being that piano wasn't Mingus' main instrument, his playing isn't as smooth as say an Ahmad Jamal, but there's so much depth to what he plays that it's undeniably beautiful. The song eventually progresses into a full on suite (like most of the album) with masterfully arranged horns and even acoustic guitar, which wasn't common on Jazz records at the time. An absolute masterpiece.

The father of a musician friend of mine says to always try and listen to things you'd never otherwise listen to. It's like a comfort zone thing that we can all get caught up in, where you're just so into a certain genre or style that you don't bother with anything else. But I've learned that opening yourself up to ANY type of music can not only lead to some incredible discoveries, but it also shapes your perception and understanding of music in a way that you'd never otherwise expect.