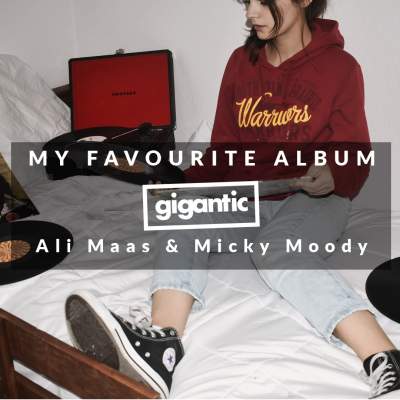 Gigantic speaks to innovative musicians to discover the best records, and this time round we have wife / husband rock and americana pairing Ali Maas & Micky Moody joining us for My Favourite Album!

Indie rock singer/songwriter Ali Maas and Micky Moody, guitarist of rock legends Whitesnake, first began their unique collaboration in 2014. Excited to full explores all the sounds that inspired them, they would combine to create their Black & Chrome LP, which exhibited a fresh take on Bluegrass, Folk, Americana, and Classic Rock.

Last year saw them reunite for the release of their stunning second album Who’s Directing Your Movie? via Last Man Music. Mastered by Grammy-nominee engineer Mazen Murad, their latest record is inspired by their shared sense of freedom which allows them to fully indulge their passions, which can be heard in their studio recording and live performances.

November 2018 - We saw Richard Thompson perform it with his trio at Richmond Theatre and bought the album the next day.

We are both huge lovers of  classic song writing. With Richard Thompson you can always expect the unexpected. True to form, this album is truly original and even though his mind seems to dip into many genres (echoes of a lifetime of storytelling folk mixed with an essence of New Wave and even a splattering of Punk), it never goes into cliche.

We both agree that the line-up on this album lays it’s roots in the perfect power trio. With Michael Jerome’s characterful and technical drumming and Taras Prodaniuk on bass (both also singing bv’s), together with Thompson’s intense performances make for a three piece which holds it’s power more in emotional delivery than just big amps and volume. You also can’t ignore the guitar of Bobby Eichorn, who plays behind the scenes too as well as acting as guitar technician at gigs.

13 Rivers is important to us as it is the coming together of our mutual admiration of Richard Thompson’s work. Micky admired him in his early days with his imagination and vision as a guitarist, while Ali was interested in the songs she heard from later works, introducing Micky to the ‘Live In Austin Texas’ recordings. So, he was an influence that we both brought to the creative table. This is probably the first album as a couple and co-writers where we said mutually “Let’s buy this!”

The album as a whole encounters what seems to be a spiritual journey, pretty dark in places. At one moment you can fall back into hypnotic grooves and back once again into heartfelt narrative a moment later.

The first four songs are killer:

In “The Storm Won’t Come”, a brooding apocalyptic intro sets the scene for an album of drama – “I am longing for a storm to blow through town. Blow these sad old buildings down. Fire to burn what fire may. Rain to wash it all away….”

Micky’s favourite is track 2, “The Rattle Within”, which asks the question whoever you are and whatever you do – “Who’s going to save you from the rattle within?”. Micky loves the innovative guitar playing on this and that on track 4, “The Bones of Gilead”, where your mindset can be altered in a semitone or a heartbeat.

Ali’s choice is track 3, “Her Love Was Meant For Me”, a bitter and wistful look over the shoulder at the perils of love…. “As a kid I saw rainbows; But life turns you upside down. Shakes the money out of your Wranglers; Leaves you heaving on the ground”.

Whilst 13 Rivers is a dark album on the whole when it comes to subject matter, we also find it very uplifting. The energy and excitement of it is palpable, the musicianship fantastic and it is a Richard Thompson definitely not fading away with the onset of age, but raging and singing up a storm!