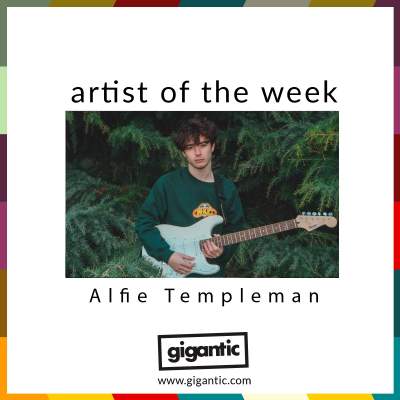 The arrival of a new indie pop icon is always an exciting event, especially when it’s a teen wunderkind. Alfie Templeman has fast become the favourite of the new generation who love his feelgood sound and R&B informed style.

Having already kicked off the year with summery single, released ahead of mini album Forever Isn't Long Enough, Templeman now announces shows in addition to his planned festival appearances – tickets on sale with Gigantic!

The boy with the big talent comes from small Bedfordshire village of Carlton where he spent his early years listening to his Dad’s Rush records. Inspired by both their innovative approach to rock and their devotion to creating a spectacle, Alfie Templeman started created his first home demos using just a toy microphone and laptop. Realising he needed way more skills to achieve the ambitious sound he sought, he began learning as many instruments as possible, trying his hand at drums, keys, guitar and even cello!

As his abilities improved, he also expanded his listening to include new wave, alt pop and 80’s influences, all of which would inform his early EP releases whose titles read like a post-modern pop joke and include Like An Animal and Sunday Morning Cereal.

“One of the reasons I learnt all that was so I could play and produce everything myself. I had to have full control over my first EP. I just wanted to see if I could put everything together so it sounded good.”

Alfie was aged only 17 when he released debut mini-album Don’t Go Wasting Time which confirmed his true status as a prodigy and saw him regularly named dropped by such esteemed critics as NME.

His rise continued with the release of his stunning Happiness in Liquid Form EP on Chess Club Records last year. Produced by Tom McFarland, member of the acclaimed Mercury Prize-nominee collective Jungle, the EP is a wonderfully eclectic mix highlighting Alfie’s many influences.

“I listen to everything! I think some people might consider me as ‘just’ an indie artist, but my music is a broad mix. There are modern influences, but also a lot of prog, classic jazz, funk... I like to play things that people don’t expect, that hit you right in the feels.”

This year has seen the release of Alfie’s latest single “Everybody’s Gonna Love Somebody” which is already being hailed as one of the best independent bangers of 2021. Tapping into the carefree summery vibes from his own past, his huge anthem is a first taste of his upcoming second mini-album Forever Isn't Long Enough, which is expected to drop on 7th May.

“I first wrote and recorded ‘Everybody’s Gonna Love Somebody’ back in 2017 when I was 14 years old and it’s been ingrained in my memory ever since. I’d always go back to it and try to re-record it but I could never quite get it right - then I went on a Tears For Fears binge and realised that it needed that ‘Everybody Wants To Rule The World’ kind of production. I got back in the studio, changed a few lyrics and cut it in a couple of hours. It’s probably my favourite song on the new record.”

Alfie Templeman cannot wait to get back on stage, and he has got some major dates coming in the new future. See him feature at such premier festivals as 110 Above and NEIGHBOURHOOD WEEKENDER this summer!

And he is already making plans for next year, announcing new headline dates which are sure to rapidly sell out soon after tickets are released at 09:00 on Friday 26th March with Gigantic. Don’t miss out and set a personal reminder right now.