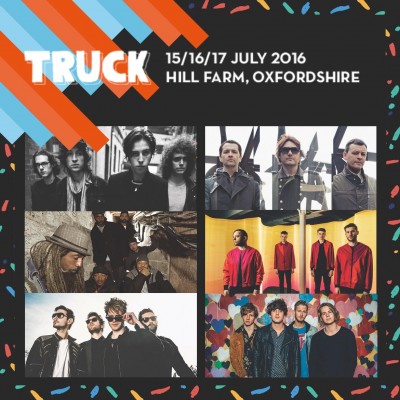 Truck Festival has come a long way since it first began in 1998 and has forged a firm reputation for playing great indie and alternative acts. Previous years has seen the likes of The Rakes, Rolo Tomassi, Forward Russia, The Cribs, Fonda 500, British Sea Power and The Edible Five Foot Smiths all grace their various stages.

Located at the beautiful Hill Farm in Steventon, Oxfordshire, the festival offers a unique feeling of belonging by enabling revellers to see massive names and exciting rising stars in an intimate setting like no other.

The festival takes place this weekend and includes all these amazing acts!

The headliners for the first night are the incredible indie rockers Catfish And The Bottlemen. The Welsh band play Truck and Y Not this summer to promote their new album The Ride before kicking off their very own headline tour around the UK.

Fellow Welsh rock band Manic Street Preachers have been enjoying a fantastic year so far. Not only have they celebrated the 20th anniversary of their glorious seminal album Everything Must Go with a resplendent arena tour which climaxed at Liberty Stadium in Newport, they have also been riding high with their single Together Stronger (C’mon Wales) which provided the soundtrack to their nation’s fantastic football achievements during Euro 2016.

Kodaline are the perfect way to round up the festival. Their anthemic songs blending elements of pop and rock tug at the heartstrings in a perfectly euphoric way. Expect to hear such fantastic hits of theirs such as Honest, Love Like This and High Hopes.

Absolutely essential to any serious festival soundtrack, Everything Everything will be getting this year's Truckers absolutely ecstatic. The amazing art rock band’s debut album Man Alive was shortlisted for the Mercury Music Prize and nominated for Best Album at Ivor Novello Awards. With upbeat grooves and a great beat they are sure to move every Truckers feet.

Intelligent electronic band Young Fathers have certainly created quite a stir since they burst onto the scene. Drawing on a massive range of influences including hip hop, krautrock, alternative rap and electronica, they have produced some of the most innovative and exciting music of recent years. No wonder their debut album Dead won the Mercury Music Prize upon its release in 2014

Bridie Monds-Watson, AKA SOAK, writes the most endearing tunes of wonder, whimsy and burning desire for wanderlust. The young star won the Irish Choice Music Prize with her phantasmic debut album Before We Forgot How To Dream and looks set to become something truly special for this generation to marvel and enjoy.

Spector have established themselves as the darlings of critics the world over and earned the rank of cult band amongst their widespread loyal fans. Somewhat post punk with a heavy leaning towards accessible pop hooks, they look set to break beyond their immediate indie scene to become Britain’s leading light.

For those of you who love fearlessly loud art rock with dense concrete slabs of distortion then be sure to check out returning Truck heros The Holy Orders. The Hull band have been invited to play the Veterans stage in expectation of their upcoming 7” single Dedicated Follower Of Fashioning Misery to be released through cool indie label Adult Teeth.

Fellow Truck Festival favourites Johnny Foreigner will also be making a warm welcomed return to Hill Farm. The band’s ferociously paced lo-fi rock delights and entices as frantic guitars wrap themselves around a good solid portion of bass that somehow just about allow time for vocals.