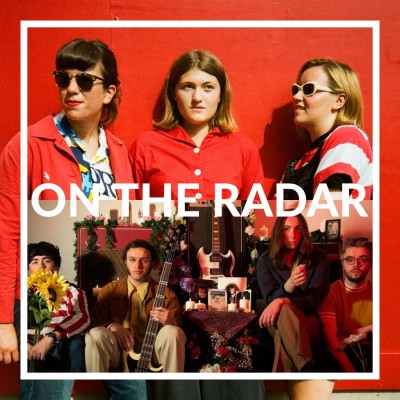 Taking all the agony of youth, its many trials and tribulations, the confusion that comes with adolescent experiences and the wonder of discovery, North London three-piece Girl Ray are quickly rising in prominence. Formed two years ago whilst aged just sixteen, the band unites the talents of teenagers Iris McConnell (drums), Poppy Hankin (guitar/vocals) and Sophie Moss (bass).

The title for the band is a play on avant-garde artists name Man Ray who was highly influential to the irrational Dadaist movement. Very fitting for a band who skip freely from one idea to the next, taking influence from anti folk, LoFi pop and 60’s Doo-wop.

Most people’s first taste of the band came with the release of their song ‘Trouble’ last year through essential label Moshi Moshi’s Singles Club which quickly began to receive prominent radio airplay whilst they toured with the likes of Haley Bonar and Slow Club. The girls have stuck with Moshi Moshi who put out their debut LP ‘Earl Grey’ earlier in August which is expected to feature in many Album Of The Year listings.

Make sure you catch Girl Ray when they take centre stage, performing a headline set at Heaven in London on Wednesday 18th of April just before the festival season starts, during which they are certain to be high in demand.

Glasgow is well known for being the home of a rich and fertile music scene, producing some of the most innovative, experimental and exciting acts over the decades. The latest act to join their ranks is Catholic Action.

Their hook laden tracks take a no-nonsense approach to sonic exploration, in the sense that each song is allowed the space to fill its own sonic territory without compromise and yet would never fail to fill the floor at an indie disco. Full of groove and boisterous confidence, fans are flocking to declare Catholic Action as their new favourite band.

Born out of the cities well renowned DIY scene, the band was formed in 2014 by vocalist Chris McCrory (of Casual Sex fame) after recruiting fellow guitarist Andrew Macpherson, drummer Ryan Clark and Jamie Dubber on bass. They immediately threw themselves into the studio and set about creating what would become their debut LP ‘In Memory Of’.

Having modest goals of simply being local heroes, the band were pleasantly surprised with the immediate reaction to their music which quickly saw industry types beating a path to their door, resulting in signing to Luv Luv Luv Records who released ‘In Memory Of’ at the end of October.

“We never really intended those original tracks to go further than the Glasgow DIY scene. But it did. The songs got out and we were quickly approached by labels and producers and managers and agents and dragged (kicking and screaming and cheering and drunk) out of Glasgow.” – Chris McCroy

With their creative juices fully flowing, Catholic Action are already in the process of working on their follow up album;

“I’m producing it again with Margo Broom and we’re recording it between my studio in Glasgow and her studio in London. It’s a very nice balance. The songs are there, and we’re feeling healthier than ever as a band – so why not just dive in now? I think we’ve recorded about 12 tracks already… I’ll be happy when we hit 25, then we’re going to melt it all into something beautiful that flows from cover to cover. I want Kevin Shields to play guitar on it. I want to change what it means to be in a guitar band.” – Chris McCroy