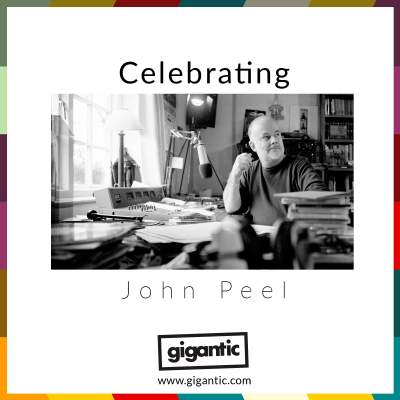 Whether it be post rock or drum and bass, gypsy punk or anti folk; the contribution John Peel played in giving the outsider musician their first chance to be heard and develop is immeasurable. To many, his understated deep authoritative tones broadcast from an intimate BBC studio will always be the authentic voice of the underground.

Fifteen years on from his death, we celebrate the legendary DJ on what would have been his 80th birthday and bring you some lesser known facts about his remarkable life.

Real name John Robert Parker Ravenscroft; he first began his career as a DJ in Dallas hosting his very own breakfast show. Returning to the UK in 1967, he worked on one of the very first offshore pirate radio stations Radio London, hosting his show 'The Perfumed Garden' under his adopted surname Peel and bringing blues, folk and psychedelic rock to the masses. Getting right up the nose of the establishment, the station was shut down by British authorities within the year.

John Peel would soon find a home on the newly established BBC Radio 1 where he presented a programme called 'Top Gear' dedicated to playing progressive music – and nothing to do with smug right-wing pundits driving cars. Success came quickly as he was named Melody Maker’s Top DJ of the year in 1968. Peel would continue to work with the BBC throughout his life and still remains Radio 1’s longest serving DJ.

Before getting into music, John was working as a travelling salesman in the US during the early Sixties and just happened to bump into none other than John F. Kennedy on his presidential electoral campaign and had a chat to the future leader of the free world. A little over three years later when Lee Harvey Oswald was brought out in front of the press charged with JFK’s assassination, Peel snuck into the conference under the pretence that he was a reporter for the Liverpool Echo and saw Oswald shot dead by Jack Ruby.

A remarkable coincidence which does beg the questions, did anyone see John anywhere near the grassy knoll that day?

The name John Peel will forever be associated with innovation in music and giving a platform for leftfield acts that otherwise would struggle to be heard. It is well known that Peel was an early champion of punk but few realise he was the person to give both David Bowie and Jimi Hendrix their first play on radio.

And Billy Bragg is yet another famed artist who will forever be in his debt. Having heard Peel announce that he would kill for a curry, Bragg sensed an opportunity and made his way to the studio with a mushroom biryani in one hand plus a copy of his record ‘Life's a Riot With Spy Vs Spy’ in the other. Delighted with the welcome meal, Peel played the vinyl record – but at the wrong speed! To make amends, Bragg was invited back to play a session giving the socialist folk singer a well needed early boost.

John was best known for his infamous Peel Sessions. But did you know Mark E. Smith’s art punk provocateurs The Fall take the title for the most appearances? The ever-changing line up might have meant that the same band members may not have returned to the studio, but as a group The Fall played an incredible 24 sessions over 26 years.

And Sheffield’s finest export Pulp held the record for the longest length between sessions. They were first invited onto the airwaves as complete unknowns in 1981 to come back as the slowest burning hot new band twelve years later kicking off their second session in 1993 with their classic track ‘Pink Glove’ just as they were becoming a defining sound of the decade.

Peel would remain as popular as ever and played his final radio show on the 14th of October 2004 before suffering a fatal heart attack later that month. His life in music left a legacy which exposed audiences to truly alternative music and opened doors to the disenfranchised and unprivileged who might otherwise have been ignored.

It was no secret that Peel’s favourite song of all time was ‘Teenage Kicks’ by The Undertones. But did you know he loved it so much he left instructions to have the lyrics etched onto his gravestone?

Here he is playing the top tune on his show upon release way back in October 1978 – thinking it might even be the last ever time!

Thanks John, we all owe you a debt of gratitude that can never be repaid. x