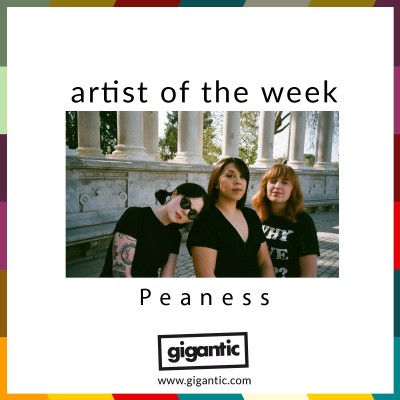 Combing bright 60’s melodies with a wicked sense of humour; indie power pop trio Peaness channel a gloriously bright side of post riot grrl to become the next big breakthrough band from the DIY underground.

Preparing to release their first full length record World Full Of Worry, Peaness reveal their apathetic anthem “What’s The Use?” plus bittersweet single “How I’m Feeling” and announce a handful of must-see headline shows – on sale with Gigantic right now HERE!

“People were like, "What?" or "You HAVE to change your name," but a lot of people listen to us out of curiosity, because they don't know what to expect. That's a blessing, isn't it? You hear the name and you stop and listen. It's just funny, and people need to lighten up a bit. If they get offended, then it's not for them.”

It seems fewer and fewer bands these days start when meeting as uni students, but Peaness started as an in joke between Jess, Balla and Rach after meeting and becoming mates whilst studying at Chester in 2014. Embracing DIY as an approach and an attitude; they picked their cheeky title and began rising through the ranks of their local scene thanks to their energetic, upbeat sound and feel-good live performances.

“We started practising in Rach’s bedroom after two of us graduated. Rach was still at uni in the year below me and Balla. We were just messing around - but with a full drum kit and amps - in a terraced house. Rach moved back home to Birmingham for a bit, but when she moved back to Chester we decided to give it a proper go. It was all just a bit of a laugh to start with!”

As the band began to swell, they soon found themselves supporting an ever-growing list of bigger names, playing before the likes of Yak, PAWS, Francobollo, Goat Girl, We Are Scientists, The Big Moon and The Lovely Eggs.

The girls would also hit the studio, dropping debut EP Are You Sure in 2017 which was picked up for airplay by the likes of BBC Introducing, BBC6 Music and BBC Radio 1 – spreading their name even further afield. Appearances at 2000 Trees, TRUCK and Indietracks Festivals then followed, where the threepiece began to attract the attention of Dork, CLASH, Kerrang! and even the esteemed Rolling Stone magazine; all charmed by their sweet yet salty sound.

Last summer saw Peaness smash the festival circuit, impressing all with their super slots at FarmFest, FESTEVOL, Green Man Festival, Confessional Festival, Manchester Psych Fest and more before the release of “What’s The Use?”– the first stirrings of their long-awaited debut album World Full Of Worry which is scheduled to pop up later this year.

Now, they have started ’22 with the release of brand-new single “How I’m Feeling” which channels feelings of frustration into a joyous song of angst and release.

“In an unfulfilling job? Need a shake up with something in your life or you’ll go mad? Well, that’s ‘How I’m Feeling’ and it can’t be ignored anymore! Amongst self-loathing and melancholy there are sparks of determination and a belief that you deserve more. I hope it works out.”

Make sure you see the great unveiling of World Full Of Worry when they play showcase gigs around the U.K. – tickets currently available with Gigantic.

Peaness tickets are on sale with Gigantic.