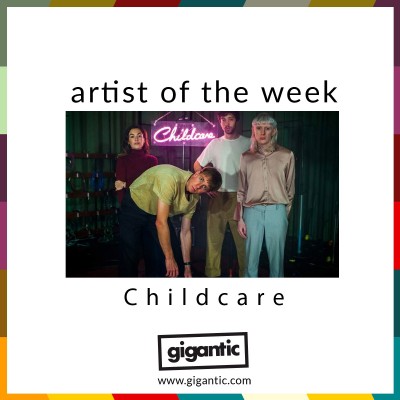 South London band Childcare find the strange place where dreams and waking meets. Both surreal and acute, their tap into the beautiful realms as conjured by Super Furry Animals, The Flaming Lips and Yo La Tengo. Following the release of their awesome second album Busy Busy People, they now annouce a tour.

Frontman Ed Cares formed Childcare in 2016, quickly attracting attention with his idiosyndratic observational lyrics put to wonderfully weird melodies. Their two applauded EPs have secured them praise from the likes of The Line of Best Fit and CLASH, and their unique sound was soon heard on BBC Radio 1.

In 2019, they dropped debut album Wabi-Sabi which is widely regarded by critics as somewhat of an uncovered gem. Its infectious indie charm and upbeat feel captivated listeners are solidified their reputation as a cult band.

This year has seen the release of the second Childcare album Busy Busy People. Including the wonderfully odd anthem “Karekoke Mantra” and suitably strange single “Little Secret”, their follow up LP was the result of over a years’ writing and perfecting in front of live audiences, to be recorded in a Somerset studio through what the band considered a laborious process necessary to produce such high results as capture by producer Dom Monks (Big Thief, Laura Marling).

A far more raw record than their previous outing, their endearing quirkiness remains throughout but takes on a more honest aspect, taking a hard (if not slightly skewed) look at the difficulties of living.

"What we do...what I do, lyrically, is I try to talk about, and hint at, the anxieties, the uncertainties, the surrealness of life that's bubbling under but I do that using everyday objects.” – Ian Cares

Catch Childcare when they begin the new year with their very own headline tour, tickets on sale with Gigantic right now.

Childcare tickets are available with Gigantic.