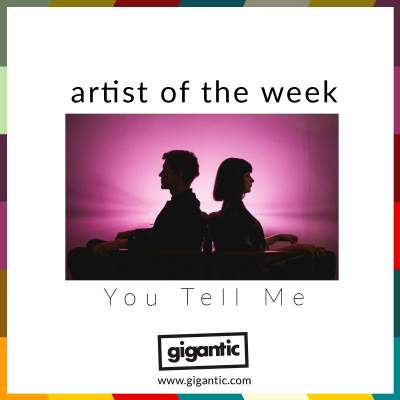 You Tell Me is the exciting new partnership of Admiral Fallow band member Sarah Hayes who has also been nominated for Composer Of The Year at the Scots Trad Music Awards, with Peter Brewis of famed Mercury Prize nominees Field Music.

Although it would be unsurprising that songwriters of such pedigree would be able to create something of beauty, owing to their remarkable relationship they have managed to gel in such a complimentary fashion that it is astonishing just how truly exceptional and brilliant their eponymously titled album is.

“You Tell Me concocts such a spell with their debut that the journey will still delight and intoxicate.” - Robert Ham, Paste

“You Tell Me is an unpindownable record: familiar enough to sound comforting, but new enough to pique your interest and make you listen for the way forms have been taken and bent.” - Michael Hann, The Guardian

Having met at a celebration concert for Kate Bush, the pair soon discovered that they had shared tastes and influences. They also realised, perhaps most importantly, that they got along and should begin working on a project together.

“I'd been an admirer of Field Music for a good while before meeting Peter at the gig. So, I was pleased to discover he wasn't an insufferable diva." - Sarah Hayes

They initially started with the intention of Brewis acting as Hayes producer, however they complimented each other so well it quickly evolved into a full-blown collaboration with the pair starting their new band.

This year has already seen the release of their accomplished self-titled debut album which exemplifies the best of both partner’s immeasurable talents and combines them to created what Brewis describes as “a sort of dual-personal record”.

This focus on the ties that bind the pair and how they communicate runs deep through the eleven tracks, with many of the stand out songs featuring sharing vocals or duets such as the gentle touch of ‘No Hurry’, the quizzical clatter of ‘Get Out Of The Room’ and impacting number ‘Water Cooler’. These themes are also found in the lyrics as Brewis explains “most of the songs seemed to either be about conversations, be conversational or about talking or not talking.” Hayes further explains; “the subject of communication - talking and listening, guessing and questioning - looms large on this record and in general for me. it's something I think about a lot.”

You Tell Me have succeeded in pushing themselves to craft a first LP they can be truly proud of which is released by Memphis Industries. Intricate layering and a patient approach to song writing has really paid off and lead to a light and airy album which allows a lot of room for experimentation which when implemented, is executed so well it feels flawless.

“Making this record has taken me out of my comfort zone. We found a way of working which, while still peppered with various conundrums that crop up in making an album, was also fun and freeing. it can be a bit of an overused word, but I think this is a genuine and meaningful collaboration.” - Sarah Hayes

Hayes and Brewis take their glorious record on the road this month and Gigantic is very excited to be able to offer your tickets for You Tell Me, on sale right now!

You Tell Me tickets are currently available.