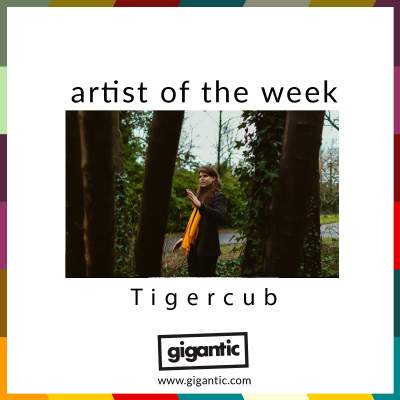 Three-piece Tigercub are the best of the new generation of British rock. Their debut album Abstract Figures in the Dark saw them rise to the top and earned them a huge fanbase which continues to grow.

The blistering band are currently laying the way for the release of second album As Blue As Indigo with singles “Beauty”, “Stop Beating on My Heart (Like a Bass Drum)” and “Blue Mist In My Head” plus the announcement of promotion tour at the end of 2021– tickets soon to be on sale with Gigantic!

First formed in 2013, hard rock noise pop trio Tigercub immediately made an impressive impact on the vibrant Brighton music scene. Combining the swagger of grunge, the power of punk and the taunt yet dynamic rhythms that hinted at the electro-rock coming out of New York in the mid-00s; they didn’t easily fit in with any real movement yet were quickly adored by all that heard them and earned them support slots for the likes of Dinosaur Pile Up and Pulled Apart By Horses.

In 2016, they dropped stunning debut album Abstract Figures in the Dark. Featuring such killer singles as “Control” and “Memory Boy”; their first full length was championed by the likes of Annie Mac who selected it as December’s New Name, Huw Stephens listed the LP on “It’s Album Time” and Daniel P Carter called it his Rockest Album.

It would be followed by their essential Evolve or Die EP, which virtually sold out instantly when the pre-order for the vinyl 12” allowed their supporters to name their price.

It’s been a long wait for fans, but this summer finally sees the release of their highly anticipated second record Blue As Indigo. The five years has seen the band develop their style as a result of their emotional growth, as hinted by new song “Stop Beating on My Heart (Like a Bass Drum)” which deals with living with toxic relationships.

Engineered and co-produced by Adrian Bushby (Muse, Foo Fighters), then co-produced by Tom Dalgety (PIXIES, Royal Blood), As Blue As Indigo is expected to be one of the biggest rock albums of the year.

“I never really felt in the past that I could talk about really personal things. I’d always used a mask. It’s quite easy to do that because you’re not exposing yourself in anyway. I’d always subconsciously tried to shy away from talking about myself. I didn’t want to do that anymore. I wanted this to be about me and process my emotions for the first time. I think that’s made us more genuine and authentic as a band.” – Jamie Stephen Hall

As Blue As Indigo is released via Blame Recordings on June 18th.

Tigercub will be playing headline shows from November and into December in support of their upcoming album As Blue As Indigo where you can see them show off their awesome new material. Tickets go on sale at 09:00 on Friday, so set a personal reminder with Gigantic to be ready for their release!