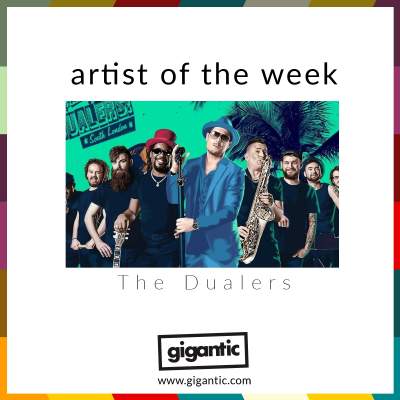 True fans of Jamaican rhythm and blues need to know The Dualers. The 9-piece band from South-East London are led by singer Tyber Canstoun and have grown from busking to becoming a truly prolific group, bringing the sound of the street to the stage at packed out venues for sold out shows and achieving huge chart success.

Attracting widespread critical acclaim for their stunning work in the studio including hit singles ‘Kiss On The Lips’ and ‘Truly Madly Deeply’, they have released several top 40 chart singles and played a record breaking 11 sell out shows at Indigo at the 02 whilst continuing to increase an ever-growing grassroots fanbase – plus even picking up a few celebrity fans along the way too. The Dualers are developing into a true force to be reckoned with!

They have announced a truly epic tour which sees them playing right round the UK for the entire duration of 2020 with tickets currently available with Gigantic.

“These local superstars are inching towards fame” – The Independent

The Dualers first began in 1997, busking on the streets of South-East London, Kent and Essex. Playing in this off-the-cuff manner taught them the presence needed to immediately grab a listener’s attention and gave them a charm that only comes from playing directly to real people that they would later take to the stage and studio.

Working outside of the music industry, they would work independently and begin to succeed on their own terms, breaking the Top 30 with their modern ska classic single ‘Kiss On The Lips’. They would proceed to release their hugely popular song ‘Truly Madly Deeply’ which would feature in Hollywood blockbuster film ‘Fools Gold’ and continue to write and record prolifically.

This year has seen them drop their sensational studio album ‘Palm Trees and 80 Degrees’ through Sunbeat Records – their first album release on vinyl! The fourteen tracks which really explore all facets of Jamaican music, including ska, rocksteady and the classic reggae sound of the 60’s and 70’s which was chilled and yet revealing their expert musicianship.

The Dualers hit maximum feelgood factor with ‘Palm Trees and 80 Degrees’ as their latest record was the perfect summer release which chimed with listeners who sent it rocketing up to No. 11 in the UK albums charts and peaking at No. 2 in the independent album charts.

Britain’s finest Ska and reggae band The Dualers have announced an intensive tour for 2020 which sees them playing huge headline gigs all around the UK for the whole year, culminating with two truly massive shows at Cardiff Motorpoint Arena and The SSE Arena – Wembley in London. Plus, they celebrate the festive season with an extra special night at the resplendent Margate Winter Gardens. Tickets are on sale with Gigantic right now!