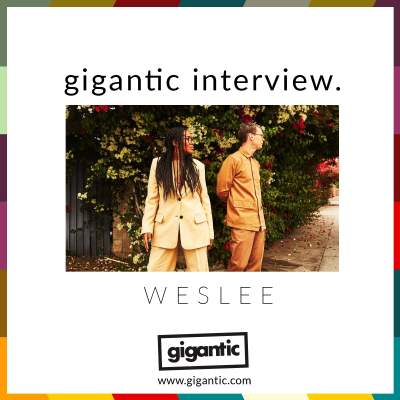 R&B pairing WESLEE are one of the biggest breakthrough acts of 2019! The enigmatic duo consists of Josh from Kansas and London girl Emma, each bringing their own distinct flavour to their experimental music which employs a delicate touch and creates an intimacy that really draws the listener in.

They immediately grabbed attention with the release of their minimalist pop single ‘Gassed’, the sparse production revealing a huge amount of personality and talent. It was followed by killer track ‘London Love’ and last year they brought out their first EP ‘9F’ which allowed them to really dig deep and show their exceptional song writing skills – making good on their early promise.

The duo have just dropped their new video for their chilled single ‘Something Bout You’ ahead of their major upcoming gig at Omeara in London taking place on Tuesday 29th of October – tickets on sale right now!

Gigantic was very lucky to have the chance to chat to WESLEE and ask them all about their meteoric rise, their creative process and their unmissable show coming soon.

You hit the ground running with the release of your debut single ‘Gassed’ – it was made BBC Radio 1’s Hottest Track just 24 hours after it had been dropped. Did you feel like an overnight success at the time?

I don’t know if we’d say it felt like an overnight success. It was more surprising that people liked the song so much…we didn’t really have any expectations or know what was going to happen and it was quite an honour to have it be “hottest record” so quickly!

Despite all the immediate attention and getting the backing from such massive stars as Annie Mac and Pete Tong, you chose to hide your identities at the beginning. Was that to create a sense of enigma?

Not really no, we just wanted it to be about the music and not about us, maybe makes it easier if nobody likes because nobody knows who made it ha

There is a real depth to your music, which often deal with strong emotions; songs like ‘Bathwater’ have an intimacy about them which feel like it comes from real life experience. What is the story behind that song?

[Emma] That song actually came to me while I was taking a shower, but ‘Bathwater’ sounded better than shower water. All of the songs I write come from a real place whether it be my own personal experience or things that have happened to friends, it’s all real.

Talk us through your process for writing new material.

We only work on new stuff when we are in the same place, and we don’t really know where the day or song is going to take us until it’s taken us there.  We are vibe people so we just talk and hang out and vibe on each other’s energy and then try and channel that into a song.

Do you think coming from different sides of the Atlantic Ocean effects your music in any way? Does it give you both a different perspective which you can bounce off?

Emma spent so much time on an airplane flying back and forth between the States and UK to work on the EP, so the 9F represents a favourite plane seat, and Emma loves a window seat.

‘9F’ has a wide range of sound; from the upbeat vibes of ‘Sweet Dreams’ to the sensitivity of ‘Boys Cry’ and the sultry sound of ‘Somebody’. Was it good to really explore where your music can go?

I think that’s just our personalities. With this EP, we didn’t sit around and talk about what it should sound like or sit around and say we need a song that does this and a song that does that, all the songs really represent whatever we were going through on the day we created them.  It wasn’t a concept EP or anything like that but in reflection it more just represented a year in both our lives.

This year has seen you bring out two huge hit singles; ‘Something Bout You’ and ‘London Love’ which both prompted a massive reaction from fans and critics alike. It seems like this is your breakthrough moment. Is that how it feels?

I think more and more we are just blessed and honoured to be given an opportunity to make music and to have people actually listening to it.

2019 has been a big year for music and it’s fantastic seeing you come to the fore. Are there any other emerging acts that you have been enjoying this year?

At the moment really loving Anaïs and Sunni Colon. Both have amazing voices and production wise are making stuff that sounds different, can’t really explain what or why certain things impact you I guess when like something you just feel it.

You have a major gig coming up, headlining Omeara next month. How do you psyche yourself up to play in front of ever-growing audiences?

And 2020 is not that far away. After you smash it at Omeara, what are you plans for the rest of the year and the next?

We have 2 more songs and videos coming out this year and then hopefully doing a little tour in both the UK and US next year and just continue to put out more music and videos and see where it all takes us.

Thanks for taking the time out to talk to us. Good luck with the gig and everything in the future! x