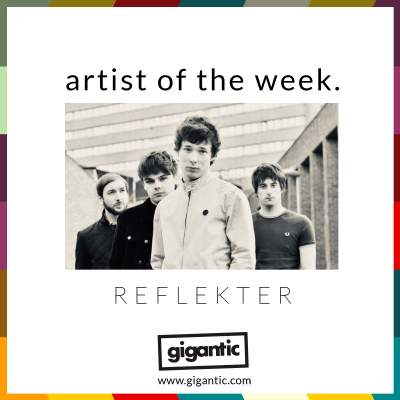 In little more than a year, raucous four-piece Reflekter have grown from obscurity to become a true force to be reckoned with. With echoes of the swaggering psychedelic inspired guitar rock of the 90’s yet defiantly looking to the future, these boys are ready to take the mantle of Britain’s most vital band.

This year has already seen the release of not one but two massive singles, the beguiling blues number ‘Caught In A Storm’ and their attitude laden anthem ‘Alright’, setting them up perfectly to capture the hearts and minds of audiences everywhere.

Having previously worked in Same Streets, a band that had gained modest traction around in his local area, singer and guitarist James Gooch was ready for something new. Nottingham is a city known for its incredible live music scene which created the massive day festival Dot To Dot which has now spread to Bristol and Manchester, and it was when it hit his hometown he was inspired by watching Fontaines DC to form a band.

Also watching were his mates Seb McNish (drums), Adam Mitchell (guitar) and Isaac Bloomfield (bass) who just so happened to be amongst the very best up and coming musicians. Ready to unleash themselves upon an unsuspecting world, they set themselves a mission to combine a classic rock feel with a cutting-edge sound.

Their arrival was announced with the release of ‘Caught In A Storm’ – an incredible song made all the more amazing when remembering their young age and that this was their debut single. The moody and atmospheric blues feel struck a chord with listeners who racked up a staggering 20,000 streams in one week alone. This explosive start immediately attracted widespread attention and they were soon named on the BBC Introducing’s Ones To Watch list for 2019.

Only a year after they first made moves to start making music together, Reflekter featured at the Nottingham leg of Dot To Dot – a real acknowledgement of both the boy’s ambition and ability. Striking while the iron was hot, they released second riotous single ‘Alright’ which was accompanied by a stripped-down acoustic version. Now alerted, the music industry was quick to raise the flag and ‘Alright’ was championed by Trash Mag and saw them elevated to Band Of The Week status by Apple Music in Italy, Turkey and Portugal plus made Tune Of The Day by The Indie Masterplan.

This year sees the likely lads touring extensively and doing what they do best – amazing audiences all around the UK! Be amongst the first to catch the fever and see Reflekter as they rise to the top!