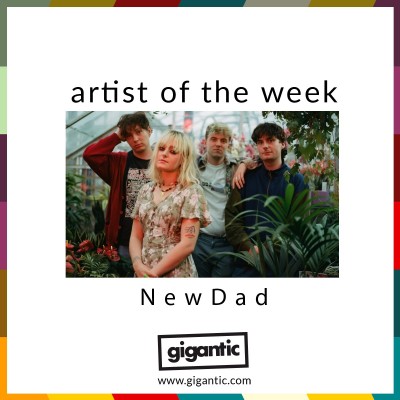 Challengingly tender; NewDad are the latest dream pop sensation to be causing a storm. Transforming turbulent lyrics into magnificent songs awash with beautiful melodies, shimmering guitars and soft yet assured vocals; the West Ireland band are already reaching international fame. They announce a tour in support of their soon to be released second EP Banshee.

It’s been a big year for the band, firstly because of the release of their remarkable debut EP Waves. Recorded in Belfast with producer Chris Ryan, the crucial 12” includes two BBC 6music a-list singles “I Don’t Recognise You” and “Blue” amongst the six tracks and marked Newdad as one of the most vital bands of the year. Now, they also drop their latest single “Ladybird”;  a gorgeous song that looks at the reality of relationships which can so easily breakdown in the face of fear and everyday struggles.

“I wrote the song after watching the film ‘Ladybird’. The chord progression reminded me of the Dave Matthew’s song that’s played throughout the film so I initially named it after that, so ‘Ladybird’ was just a working title. I then wrote the lyrics about the difficult part of relationships and the struggle we sometimes face when we’re away from someone and the fears and anxieties we have about what they’re doing or if they’re okay, I realised this coincided with the relationship between the mother and daughter in the film so the title ended up being pretty fitting. It’s about the give and take in any relationship really and about the struggles of being away from someone you care about.” – Julie Dawson

“Ladybird” will feature on NewDad’s forthcoming second EP Banshee which is schedule for release early next year and will be promoted by a newly announced tour that sees the Galway gang hit the road during Spring 2022. Gigantic has Newdad tickets on sale right now, so grab yours before they go!

NewDad tickets are available with Gigantic.