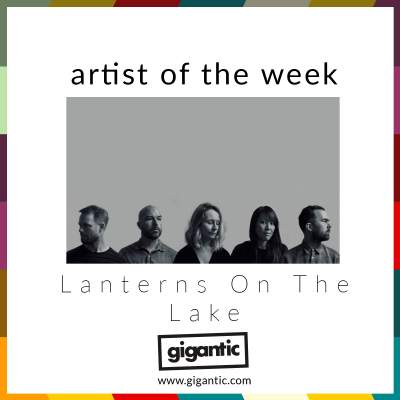 Deeply atmospheric, Lanterns On The Lake have an almost eerie take on dream pop. The haunting beauty and reverberating melodies create an emotive feel and a stirring listen.

They have now released their inspiring song ‘Every Atom’ which is the lead single taken from their fourth album ‘Spook the Herd’ which is schedule for release next year and sees them tour the UK in support of the new material.

Formed in 2007, Newcastle band Lanterns On The Lake first self-released ‘The Starlight EP’ plus second EP ‘Misfortunes and Minor Victories’ which suitably impressed and saw them picked up by respected independent label Bella Union – known for collecting acts which push the envelope through bold experimentation. In 2011 they would release debut album ‘Gracious Tide, Take Me Home’ followed by second LP ‘Until The Colours Run’ two years later which would earn them a devoted following.

It was the release of third LP ‘Beings’ which truly took the band to the next level. Choosing to isolate themselves and work as independently as possible, it allowed Lanterns On The Lake to truly develop their music and a strong sense of identity shines throughout the ten tracks which explore ideas of community, culture and decency.

“There’s such frustrating injustice in the world, yet this feels like a time of disconnection where we’re encouraged to celebrate the shallow side of culture. This record carries that sense of yearning for something greater.”

The acclaimed album was well received by critics and saw Drowned In Sound call them "one of Britain's most crucial bands of the present moment." Recognising they were at a pivotal moment in their career, they chose to record their major gig at Sage Gatehead which they released as a live album ‘Live In Concert’ at the end of 2017.

In 2018, Wilde revealed she had been working in secret with Justin Lockey, guitarist from Editors who has taken a leading role on such exciting projects as Minor Victories and mastersystem, writing music for over ten years for a clandestine band they call Lights On Moscow. Their first EP was titled ‘Aorta Songs – Part 1’ and released last year – read more HERE.

Last week saw the release of their brand new single ‘Every Atom’. The evocative song explores the aftereffects of tragedy and the lasting feelings of heartache which echo inside as we such to find meaning from the absurd inevitable conclusion of death that comes with every life.

"This is a song about grief and how your subconscious takes a long time to accept when someone is dead and gone forever, even when the rational side of you understands it. I put that idea into a story where the narrator is my subconscious searching for someone in this dream-like fictional world. I go to the extremes to search for even just a trace of them… through all of space and time, splitting every atom, ‘until Andromeda and the Milky Way collide’. I won’t give up. I can’t let go." – Hazel Wilde

‘Every Atom’ retains their spacious sound and finds a heart-warming truth that memories may hurt, but we may collectively live on in the minds of our loved ones. It was first given air play by Lauren Laverne on her BBC 6 Music show.

The new single will feature on their forthcoming album ‘Spook the Herd’ which is scheduled for release on Friday 21st of February 2020 via Bella Union and is promoted by a tour in April. It saw Lanterns On The Lake decamp from Newcastle to record the new material as live as possible at Distant City Studio, hidden away at the picturesque West Yorkshire village of Ripponden, with the assistance of engineer Joss Worthington and Gregory acting as producer.

"We are a pretty insular band in how we work, and trusting other people enough to allow them to get involved is not always easy for us" – Hazel Wilde

The close collaboration was an unusual approach for the band who prefer to work alone. However, the whole process took just three weeks and the leap of faith is showing every sign of having paid off as shown by ‘Every Atom’ and ‘Spook the Herd’ will not doubt be a truly powerful record which address the trials facing this generation and the subsequent existential crisis they cause. Whilst we may be faced with the turbulence of climate change, political uncertainty with the increasing viciousness of the right and the negative effects of social media; ‘Spook the Herd’ also offers the hope that we may topple false idols and come together to build a better future.

You can pre-order ‘Spook the Herd’ by Lanterns On The Lake on CD, MP3 and singed vinyl HERE.

Lanterns On The Lake Tickets Lights On Moscow Tickets