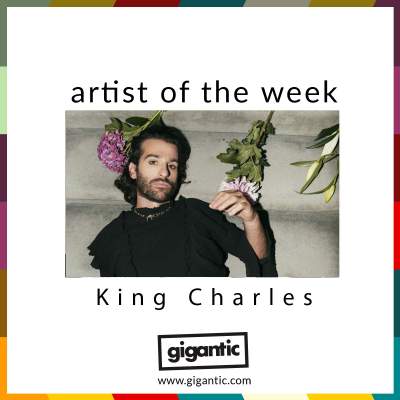 Ever since he was named ‘International Songwriter Of The Year', the rise of magnetic musician King Charles has been meteoric thanks to his unique vision which sees him bend genres to his will.

This year has seen the enigmatic monarch return with what many are calling his finest record yet – ‘Out Of My Mind’. With fans all agreeing they love what they hear, make sure you grab a ticket with Gigantic to see King Charles on tour next year!

“King Charles has created a beautiful album, the production is first class – his best album yet.”

"They say the freaks shall inherit the earth, and it will be King Charles who was ordained by god to rule over them" – Clash Magazine

Taking a wonderfully eclectic approach, London based songwriter Charles Costa adopted the regal moniker King Charles and began to blend his love of multiple styles and adopting alternative rock and enthuse it with charming folk and give it an accessible pop appeal. His idiosyncratic sound and unique style was a huge hit at the International Songwriting Competition in Nashville, where the esteemed judging panel including Tom Waits, Jeff Beck, Loretta Lynn and Jerry Lee Lewis chose Costa as their winner.

This led to a record contract with major label Universal Republic/Island who released remarkable debut album ‘LoveBlood’ in 2012. Created with the assistance of producer Matthew Wilder (Miley Cyrus, No Doubt, Christine Aguilera), it was a standout album of the year and marked the arrival of a true star.

Having proven himself on record and to a select few, Costa then impressed a global audience by touring intensively around the world playing to packed out adoring audiences in every country he appeared at. When the time was ready, he once again headed back into the studio to create second record ‘Gamble for a Rose’. Released in 2016, he then took a folk orientated approach which he achieved with the help of nonother than Marcus Mumford of the renowned band Mumford & Sons which enabled him to get the perfect fusion of traditional sound with a modern feel.

It’s been a little while since we have had a King Charles album – but fortunately the new LP ‘Out Of My Mind’ is everything and more than we could have hoped. Once again reuniting with Matthew Wilder to rekindle the magic unleashed on his first outing, his new record dares to explore more mature themes of mental health, heartbreak, loneliness and sexuality whilst pushing the boundaries of his music even further. The gambit has certainly worked as proven by such powerful singles as ‘Deeper Love/Freak’, ‘Feel These Heavy Times’ and ‘Money Is God’ which have seen the LP garnished with nonstop credits form the critics.

Clearly at a high point in his career, don’t miss your chance to see King Charles when he takes the ‘Out Of My Mind’ album on tour with headline dates throughout February. Tickets are currently on sale with Gigantic – get yours before they all go!