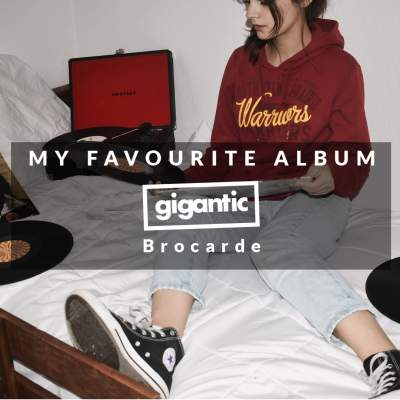 We continue in our quest to discover the very best records and this week we are joined for My Favourite Album by hard rocker Brocarde.

Fans have flocked to her dark sound and gothic Lolita style, which meant the release of debut EP ‘Love Me ‘Til I’m Beautiful’ was a huge success when it dropped in summer. Featuring the talents of Korn drummer Ray Luzier, it has already racked up a staggering 800,000 streams.

This month has seen the release of Brocarde’s intense new single ‘Twisted’. Already getting some serious airplay on Kerrang! Radio, this anthem for the alienated is a rallying cry to tear up the rulebook and do what you want no matter what the judgemental think. It is accompanied by a horror film inspired video, perfectly matching her shock rock image.

Brocarde has also release a limited edition merch line of lyric adorned dresses in support of ‘Twisted’ which you can get HERE.

‘Bat Out Of Hell’ - Meatloaf, with a glass of cabernet sauvignon and a potent cheese plate! It literally makes me want to hunt Jim Steinman down and throw rose petals at him!

1977 because Google says so, it was before I was born.

When I was a gnarly angst filled teenager, my Dad used to blast this record from downstairs and make the floorboards of my bedroom tremble. It almost feels like the album of my parents’ divorce as I remember there being so much tension in the walls at the time and this music felt like an outlet and a way of letting off a lot of steam. It was my first real introduction to rock music, and I loved it even though it felt like I wasn’t supposed to as a teenager in a world of boybands. I think it was its passionate that hit me, and its freedom of both expression and creativity, it was eye opening to a young girl struggling to come to terms with my emotions. It planted a seed that rock music could be an outlet, at the time I wrote songs and poems but was really stuck in a classically driven world, the spirit of rock music really captured the emotion that I was longing to portrait.

Perhaps more than anything freedom and maybe even permission, the notion that creativity and music can span a multitude of genre’s and not be confined. When I write music my focus really is on the storytelling, I try to take the listener on a journey through my emotions by orchestrating my feelings, I’m variable, almost like the notion of heaven and hell and I see that in this album also. So, it’s relatability and the emphasis on pure passion is appealing.

Oh there’s lots of good ones, “Nothing really rocks, and nothing really rolls, And nothing's ever worth the cost” from ‘Bat Out Of Hell’ - that speaks volumes and plays into my cynical side, aside from its primary meaning it’s affirmation of an emptiness or unfulfillment that seems to be paramount in artists.

“On a hot summer night Would you offer your throat to the wolf with the red roses…?” - from ‘You Took The Words Right Out Of My Mouth’ - I’m literally like YES!! That whole tussle and spoken word intro is pure fire, even after you try to kill it with a 21st century feminist agenda. The whole theatrics of using spoken word, orchestration and heavy rock are all things that I do with my own music, I love the notion of being totally eclectic and without rules and boundaries.

The same goes with ‘Paradise by the Dashboard Light’ the way the song progresses and takes on a life of its own is a real emotional battle, it’s genius and it has power in its rawness.

And finally, I can’t possibly forget this one… “Heaven can wait, And a band of angels wrapped up in my heart, Will take me through the lonely night…” The pure fragility of this and simplicity is beautiful, if you catch me in the right (or wrong) mood this song can make me cry.

If I add any more, I’ll start to sound like the founding member of the Meatloaf fan club so I think I’ve given enough love for one day! It was a tricky ask to choose a favourite album, because I think like everyone, I listen to a lot of music every day and try not to let anything influence my own sound. However, when you look back you come to realise that we are all influenced in some ways by our surroundings and our upbringing and music we hear at pivotal point of our lives, particularly childhood. So, I think this album, as something that introduced me to rock music and passionate music is a notable one for me and works outside of the context of trying to be cool and current.