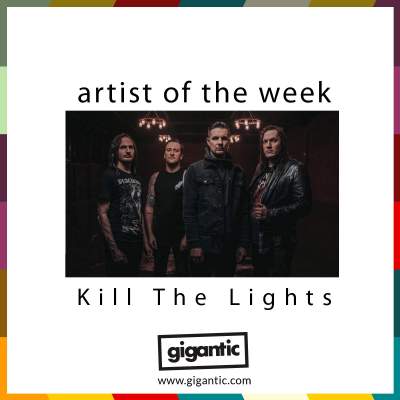 Led by former Bullet For My Valentine drummer Michael “Moose” Thomas, Kill The Lights are more than a project – they’re the band you need in your life right now!

At a time when venues are silent from the pandemic, fans of heavy music are begging for the sound of thrashing guitars, rock hard bass and the unrelenting punch of drums. Thankfully, they’ll get their fix listening to new band Kill The Lights who raise the flag for melodic metal.

This year has seen the release of their awesome debut album ‘The Sinner’ which is getting incredible reviews from the rock press. The promote their killer new material with a huge headline tour during March 2021 – tickets on sale with Gigantic!

Rewind to 2017 and Michael “Moose” Thomas, famed for having drummed for Bullet For My Valentine, was looking for a new band. Kill The Lights started out as a personal project which allowed him to fully explore many eras of metal with no pressure of expectations from the audience. Rounding up a stellar cast of collaborators, the sessions would see him rediscover the passion and energy which comes when first writing music as a teenager.

“I was at home thinking about how far I’ve come from the place where I was brought up. I couldn’t let go of all the passion and hard work, so I sent Jordan a text and asked if he wanted to do something. He started sending me ideas.” – Michael ‘Moose’ Thomas

The bond firmly established early on, the decision was made to make the band official and the response was huge, quickly amassing a staggering 1 million streams. The        excitement continues to build with the release of their debut album ‘The Sinner’ later this month. Already a huge hit and getting rave reviews from KERRANG!, Metal Hammer and Rock Sound; it’s a culmination of each members colossal experience and talent which can be heard over eleven tracks which is centred around melodic-metal whilst also tapping into thrash and hardcore.

“Being fans of metal, these songs mean a lot to us. We wanted to create a record of relatable music. We hope fans enjoy it as much as we enjoyed making it.” – Michael ‘Moose’ Thomas

Included on ‘The Sinner’ is the single ‘Through The Night’; a powerful anthem which deals with issues of depression and mental health in a very direct way, as Clark explains;

“The song hits home for me very personally. I have struggled for the longest time with anxiety and depression and Through the Night is a snapshot of what is going through the mind of someone struggling with these types of mental health issues. The song takes you on a roller coaster ride and captures the ups and downs of someone carrying the weight of the world on their shoulders, going from happy and energetic one minute to being paralysed by fear and worry the next.”

‘The Sinner’ is out now via Fearless Records on CD and streaming services.

Do not miss your chance to see Kill The Lights play live. Embarking on their very first UK headline tour, they will be joined by Newcastle based hardcore band GroundCulture who have previously supported such heavyweights as Every Time I Die, and tickets are on sale right now with Gigantic!