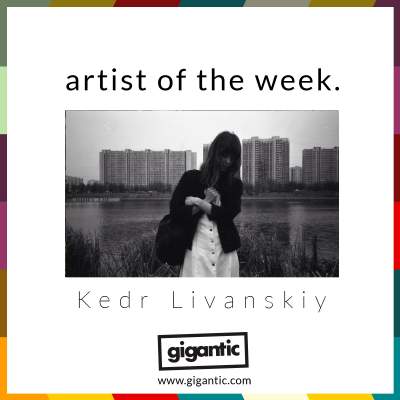 Kedr Livanskiy is the stage name of Russian singer and producer Yana Kedrina who draws on techno, jungle and darkwave to produce her own unique alt-pop sound. Whilst initially inhabiting an almost melancholic sphere of minimalist beats as heard on first album ‘Ariadna’, she has more recently embraced a sense of euphoria which inhabits second LP ‘Your Need’.

Yana Kedrina was born in Moscow just one year before the collapse of the Soviet Union. A true 90’s child who had no experience of the rigidity and ideological puritanism of the USSR, she grew up in a country that was keen to enjoy the new artistic freedoms and was first drawn to the energy of punk. Whilst studying, she discovered the Russian underground electronica scene and started a label collective called ‘Johns Kingdom’ with friends which gained a reputation for its excellent roster of acts.

Given her past for performing, it would only be a matter of time before Kedrina would also begin to embrace her new passion more fully and begin to write her own material which she posted on her SoundCloud page under the name Kedr Livanskiy which is Russian for Lebanese Cedar. She would attract international attention and be discovered by Simonetti who signed her to his New Jersey based label 2MR.

In 2015, she dropped her first single ‘Sgoraet’ which stood out owing to her striking voice shining out from the dark and atmospheric beats she created, finishing with a burst of drum and bass. It was soon followed by her eight track EP ‘January Sun’ which received rave reviews from the critics and truly established her presence in her home country and in the west. With the momentum increasing, she brought out her debut album ‘Ariadna’ during September of 2017 which would be a truly emotional exploration into her unique dark and echoing lofi techno. With the release of ‘Ariadna’, Kedrina could truly say that she had arrived as she rose to become one of the most prominent new Russian artists with a truly global audience.

Despite these early flourishes of success, Kedrina felt that she was losing her sense of self and her identity was being curbed by the public’s perception as a moody character rather than the reality. Rather than accept the limitations of the role she could have easily played, she instead began looking for other expressive avenues and found the release she needed through DJing and was found the creative inspiration she so badly needed. Through exploring various genres, including older forms of dance music such as house, breakbeat and UK garage, getting a deep understanding of them and learning how to adapt them for her own needs on the decks, she was able to also incorporate the various sounds into her own music.

The result was a more joyous and vibrant second album titled ‘Your Need’, released last year. Abstracting her own experiences, the follow up LP tells the almost mythical story of a hero who becomes lost amidst the distractions of a bad romance and consumed by bad trips only to persevere, breakthrough and once again finding her way and breathing fresh air in the blazing sunshine of a bright new day. The dark techno feel can still be heard on ‘Your Need’, but it is augmented with dub and deep house indicating Kedrina’s new-found energy.

Kedr Livanskiy will fly here in November, to play rare UK headline dates. Do not miss your chance to hear her perform her unique sound live – tickets on sale with Gigantic right now!