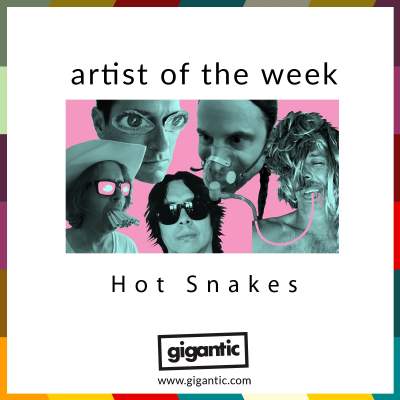 Californian DIY post-hardcore band Hot Snakes take a no frills approach which perfectly suits the rampant nature of their music. Led by John Reis of Rocket From The Crypt fame and Rick Froberg, the pair are long term collaborators having both worked together previously in Pitchfork and Drive Like Jehu before forming the cult band.

While the pair continue to work in many areas, Hot Snakes has always been more than just a side project and the passion for them rides high around the world largely owing to their prolific output and intense onstage presence. Their albums initial albums were fired out in rapid succession, with no diminishing quality mirroring their frenzied live performances.

More recently, they have returned with killer album ‘Jericho Sirens’ which continues their reign of sonic terror.

High school friends Rick Froberg and John Reis had been playing together since their early days and would form their seminal post-hardcore band Pitchfork in 1986 followed by Drive Like Jehu in 1991. It would be in the last year of the twentieth century that they would start Hot Snakes.

Leaner than their previous incarnations, yet no less turbulent and riddled with adrenaline; Hot Snakes infused elements of punk, post-hardcore and garage rock into blistering hot guitar riffs. They would release and tour debut album ‘Automatic Midnight’ in the rare moments Reis was free from the commitments of his other band; Rocket From The Crypt.

Finding audiences around the world, they would quickly come back with second album ‘Suicide Invoice’ in 2002 which would lead to gigs across the UK plus recording their incredible ‘Peel Sessions’ EP.

In 2004, Reis would once again find time away from Rocket From The Crypt to record their third album. ‘Audit In Progress’ taking a more direct and aggressive approach, it would be declared "best punk album" the following year at the San Diego Music Awards and despite seeing them reach even larger audiences than ever before it nearly became their last.

Whilst touring the album, Hot Snakes made their way to Australia to tour in 2005 during which they hit ABC studios to record a live in-studio performance for A radio station JJJ. Upon return, they made the shock announcement that they intended to break up whilst the band was on a high to the dismay of their fans. Although they released the JJJ session as the live album ‘Thunder Down Under’ a year later to remind everyone just what a fearsome live act they were, many were worried the split was permanent and they might never see them on stage again.

But these fears would prove to be unfounded as Hot Snakes emerged from what we now know was just a hiatus to begin making welcome return appearances on the festival circuit in 2011. However, it wasn’t clear if they intended to write any new material as each show was centred around their previous records. But in 2018 they signed up with iconic indie label Sub Pop to release their latest LP: ‘Jericho Sirens’. Their first full length record in 14 years was not short on energy, packing ten explosive songs into around 30 minutes, and proved that they were as vital as ever rather than just cruising on an easy nostalgia trip.

Now, we are extremely excited to announce that Hot Snakes will be hitting the UK playing intimate gigs throughout December. Sure to sell out fast, make sure you grab your tickets with Gigantic right now!