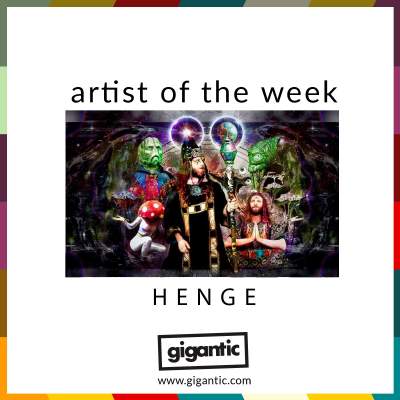 If you’re looking for something truly special to mess with your mind then make sure you have a good hard toke on the madness coming from prog ravers HENGE. These cosmic cartoon aliens have fallen from the sky with messages of peace and love, invading the party with big beats and outlandish outfits.

Renowned for their incredible live shows, they have wowed followers on the international festival circuit and found a home at the hallowed grounds of Glastonbury. They impressed fans and critics alike in 2018 with debut album “Attention Earth!” which introduced humanity to their cosmic dross sound that they now follow with their second dose LP “ExoKosm” and will be touring extensively in 2021!

Aptly titled “Attention Earth!”; the debut album from space hippy ravers HENGE was the world’s first exposure to their unique sound with they call cosmic dross. Which, if you’re looking to make sense of, is a frenetic explosion of genres including psyche jazz, chiptune, nu rave and spacerock.

It’s a wonderfully crazy sound which, when combined with their wonderful neo pagan costumes and exo-planet culture imagery, makes for the perfect festival experience and Henge have delighted revellers and opened the third eye at Bluedot, Shambala, Beatherder Festival and got a huge reaction at Glastonbury. Their global mission to expand minds has seen them zoom round the international festival circuit, touching down at Fusion Festival in Germany, Down the Rabbit Hole in the Netherlands and Jungle Love Festival in Australia.

This year has seen the release of their wonderfully wonky second album “ExoKosm”, an out of this world voyage into the very fringes of sanity, finding its way deep into your brain with infectious ravey beats, rampaging riffs and even their very own take on a Spaghetti Western film score!

Produced by Jim Spencer at Hope Mill Studios and Eve studios in Manchester, it’s a euphoric trip of adrenaline and joyous interstellar communiqués proving Henge are definitely here to stay.

“Our message for humankind has not changed in the two years since releasing Attention Earth! You may recall that our last record ended with the song Demilitarise which urges your species to halt the manufacture of weapons and instead concentrate your resources on exploring space together. We hope you heed this message as the survival of your species depends on it. We present our new album ExoKosm as your soundtrack to that journey into space.”

The future is now! Grab your homemade tinfoil hat and book a ticket to see HENGE spreading their cosmic dross all across the land in 2021 – on sale with Gigantic right now!