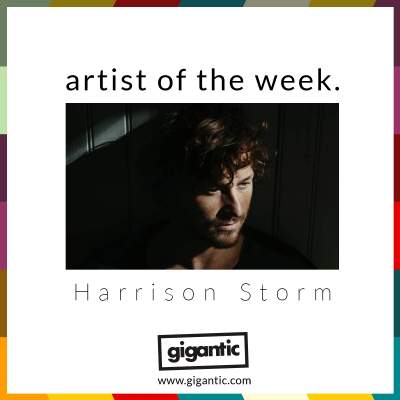 A prodigious songwriter so talented, he is already making a name for himself right around the globe. Harrison Storm is the charismatic singer and guitarist from Australia whose star is rising thanks to such magnificent songs as ‘Run’, ‘Falling Down’ and ‘Change It All’.

Attracting even more listeners every day, Gigantic is very excited to be able to offer you tickets to see Harrison Storm perform live.

Born and raised in seaside town of Mornington found just south of Melbourne in Victoria, Harrison Storm spent his early years soaking in the sun and enjoying live by the coast. His early attraction to music led to an obsession of the work of The Beatles and Neil Young, direct influences which would later inform his own material.

“I got my first guitar for my 10th birthday and I guess a few years of lessons lead to listening to music differently. It probably wasn’t until I was in my late teens that I realized playing and writing music could be a way of comprehending the world.”

Initially studying at college, Storm selected to drop out and focus on his music. Busking on the streets of Melbourne, he learned how to grab attention and work a crowd, skills he would later take to the stage. Saving the earnings he made from these impromptu performances, he was able to pay for studio time and record what would become his debut EP ‘Sense Of Home’ which was released in 2015. The title song of the four track EP began to get traction amongst various streaming sites and his online presence grew as he featured on more and more essential playlists.

This early success saw him sign to Australian label Nettwerk who re-released ‘Sense Of Home’ and were keen to ready Storm to perform to even larger audiences.

Now with the backing of a major label, Storm released his second EP ‘Change It All’. It provided him with a platform to extend his song writing skills and push for further innovation including implementing loop sampling: “I ended up writing a few songs with this loop pedal that I bought last year.  It was a fun way to sit back while the loop ran a riff and just focus on singing without having to play the guitar. ‘Meet Me There’ was one of a handful of tracks I wrote this way. I’d just started recording ‘Change It All’ with Hayden (Calnin) and one day in the studio I showed him a snippet from a voice memo I’d recorded of ‘Meet Me There’”.

Storm has since proceeded to write and release a series of powerful singles including the liberating song ‘Run’ and emotionally charged ‘Falling Down’.

This Autumn, you can see Harrison Storm as he tears around the UK as part of is world tour playing just a handful of dates. Make sure you pickup your ticket before they all sell out!