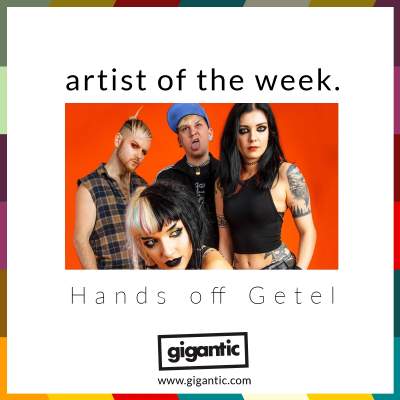 Reviving the white-hot rage of riot grrl and the dense distortion of grunge, Hands Off Gretel are the ferocious fourpiece from Sheffield. Formed in 2015, they first proved to be a force to be reckoned with on their savage initial album ‘Burn The Beauty Queen’ and have developed their sound further to show real emotional depth on sophomore LP ‘I Want The World’.

Their band members include drummer Sam Hobbins, guitarists Sean Bon and Lauren Tate screaming her way through the vocals and Becky Baldwin on bass.

In 2016, they dropped their debut album ‘Burn The Beauty Queen’. While it was relatively short, comprised of just eight tracks, the anger and attitude gave each song an undeniable power. A huge hit with the underground press, Moshville excitedly declared the angst-ridden record as “audacious” plus “poetry in a physical form” while Louder Than War went so far as to call them “the single most exciting young band in the UK”. Keeping the momentum rolling, they brought out their ‘Bedroom Sessions’ the same year which was a real treat for fans featuring acoustic reworkings of tracks, demos and remixes. Both releases would solidify their fanbase and see them gig heavily, touring Europe and playing the hardest rocking festivals in the UK.

This year, the South Yorkshire rockers released their awesome follow up album ‘I Want The World’ on their very ow label Puke Pop Records. The bulk of the recording process took place in the glorious technicolour of LA and the sunkissed climes certainly inform the music. The bright and brash attitude of The City Of Angels shines through the twelve tracks which include the huge anthem for the alienated ‘Freaks Like Us’ and rampaging title single ‘I Want The World’. When their second LP isn’t tearing it up with fierce punk rock on songs like ‘Kiss Me Girl’ and ‘S.A.S.S’ then it’s expressing wrought heartache on ‘Blame Myself’ and ‘It’s My Fault’.

"It feels like I wrote this album 6 years ago in a school toilet whilst skipping class and hiding from the world. The way I felt so ostracized and alone, like I didn't fit in anywhere. It became my mission to sing for the outcasts, the weird kids, the ones that feel mis-represented in society and left behind like I do. I made it my obligation at 15 to make as much noise as possible as a young woman, to challenge everything."

Hands Off Gretel will be showing off the blistering new record with a huge tour during March next year. As ever, there are limited amounts of tickets which are released on Friday through Gigantic so set a personal reminder right now!