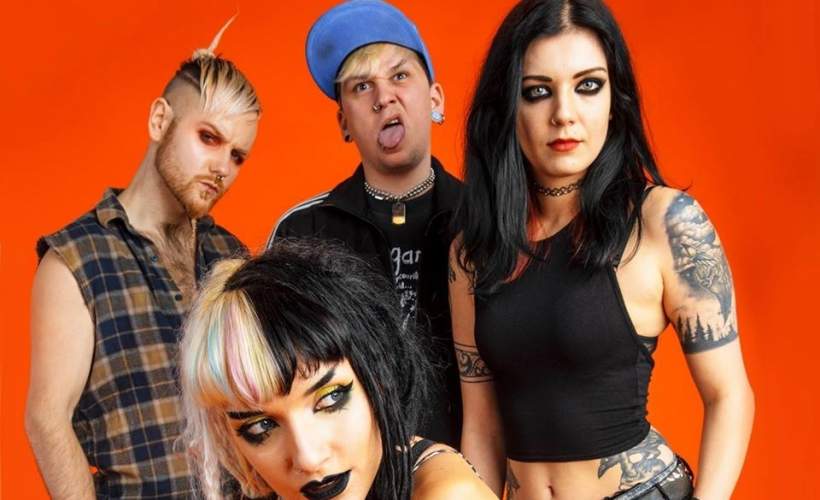 Don’t miss your chance to see Hands Off Gretel play live! The have just announced a major headline gig which sees them take over Thekla in bohemian Bristol on Saturday 14th of March 2020.

Leading a busy life, it is easy to forget when your favourite gig tickets are going on sale and miss out. So, set a personal reminder with Gigantic and then you will be alerted with a text message or an email just prior to the release of Hands Off Gretel gig tickets at 10:00 on Friday 29th of November.

Hands Off Gretel is rock for the new generation. The band have a strong DIY ethic, reminiscent of the Riot Grrrl bands of the 90’s and benefit from the creative talents of band founder Lauren Tate, who designs all the bands merchandise and produces the bands music videos. Its all very 'Girl in her bedroom' with handwritten thank you notes with every order and colourful zines about female empowerment.

Over the past year the online fanbase has grown quickly, including an International following that has watched Lauren grow up online, from posting viral covers at the age of 14 to the young woman fronting Hands Off Gretel.

The band has really harnessed the power and the creative use of social media, creating a buzz around them that brings photographers and reviewers flocking to their gigs and a willing audience for their energetic grunge rock music.

We are as excited as the fans to be able to off you Hands Off Gretel tickets. As an award-winning ticket vendor, Gigantic can offer you fantastic customer service to help you select from an ever-growing massive selection of the hottest gig tickets which you can book through our site 24/7 using your tablet, smartphone or computer.

Hands Off Gretel was formed from the foundations of an early musical partnership between Lauren Tate and guitarist Sean McAvinue. Following a tumble down the stairs at rehearsal, Sean broke his hand and the then recently formed Lauren Tate Band quickly fell apart. Frustrated by having to wait till he got fixed, Lauren picked up the electric guitar for the first time and started to play. She wrote a bunch of new songs describing them as 'frustration songs' with a new rawness, expressive energy and honesty. Lauren felt the world needed more angsty honest females in a sea of commercialised pop, singing about break ups and being famous; she gave the world Hands Off Gretel! The band launched in feb 2015 with the release of their first video ‘Be Mine’ and a 3 track EP for free download.

In less than 3 months Hands Off Gretel were invited to play both Camden Rocks Festival, after being selected from over 3,000 band entries and Devolution Magazines 10th year Anniversary event.

The band have also been recognised Internationally, including the US where Alternative Press picked them out as “A band you need to know about” in their Feb 16 Edition and Brooklyns TomTom magazine featured their EP. Late 2015 saw a few adjustments to the bands original line up, with Sam Hobbins, (Lauren’s former lead guitarist in her solo band), stepping in on bass, to help the band out. Lauren invited Sam to record drums and bass on their current album and he’s now found his rightful place as Hands Off Gretel’s drummer, fulfilling Lauren’s long-term secret ambition, to see Sam in the drumming seat! Joe Scotcher, the latest addition to the band, joins on bass and completes the line up for 2016, bringing a new tightness and energy to the band.

2016 kicked off with the single release ‘My Size’, receiving airplay on Team Rock Radio and the DIY self produced video being featured by Alternative Press. The first gig of the year, Whitby Goth Weekend, saw them playing to a packed house, drawn in by their energetic on stage presence, punk rock attitude and raw sound.

Momentum for the band is building, with dates this year including Camden Rocks Festival, Blackpool’s legendary Rebellion Festival, Kaya Festival and Isle of Wight Festival.

As there are only limited Hands Off Gretel, concert tickets available you will need to act fast and book quickly. Gigantic has been proudly providing excellent customer service for over ten years. That level of experience and dedication means we are the right place to book your essential gig tickets whenever you are planning your big night out.

Get your ticket for Hands Off Gretel with Gigantic!

Hands Off Gretel - White hot punk rock from a band ready to take on the world!

That's all we have for Hands Off Gretel! Check out their upcoming shows