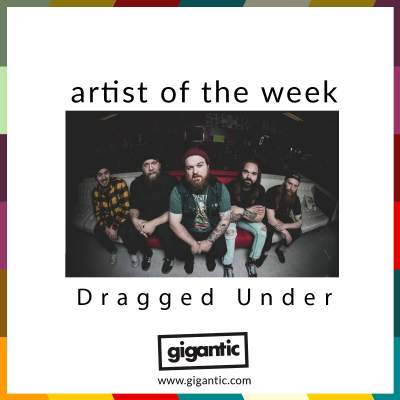 Pop punk has found new champions in the guise of West Coast fourpiece Dragged Under! They perfect feel good tunes by blending awesome tech metal riffs with the rowdy spirit of punk, earning them a massive international fanbase that has pushed them well beyond 10 million streams.

This year has seen quintet singer Tony Cappocchi, guitarists Sean Rosario and Ryan Bruce, plus drummer Kalen Anderson and bassist Hans Hessburg release their killer debut album “The World Is In Your Way” which is THE essential 2020 record for those that love to rock! 🤘🏿

“We don’t want to be too soft or too heavy, we ride the line. We Want to bring back the culture around D.I.Y., angry, aggressive and fast music. This was the soundtrack to our youth. In our own way, we serve up that dish laced with metal, hardcore and ear candy!”

Getting into the festive spirit, the Seattle based band have just dropped their very own Christmas single This Holiday which is sure to jingle your bells. Plus, they give their UK fans the extra present in the form of a summer tour – tickets have just been released with Gigantic!

It was a big start of the year for the band who dropped their dropped debut album “The World Is In Your Way” way back in January. Wild and untamed, their first full length starts with rampaging intro song The Real You and doesn’t let up right to the finish! Check out the guttural screams on Just Like Me, emotive track Feel It and Riot which takes aim at the corrupt US political system and demands to take the power back.

We particularly love huge trash track The Hardest Drug which is loaded with all the passion of those exciting first times, as singer Cappocchi explains; “It encompasses the first time you heard a song, saw a movie, kissed, fucked, or loved somebody”

As if they weren’t busy enough, Dragged Under have also just released their very own yuletide anthem This Holiday! Recognising that not everyone is having such a special time, their Christmas carol is an ode to those struggling to make ends meet.

“This Holiday is our answer to all the super happy Christmas songs that are forced on us year after year. They’re all so cheery, and bubblegum, and the reality is that the holidays aren’t like that for everyone. A lot of people (especially this year) don’t think of the holidays as a great time. Whether they’ve lost someone, don’t have family or money, or just don’t like being around people pretending to like each other. I had skipped holidays for years while working my dead-end retail job, and I think it made me a little cold to the holidays. Especially when people come to the mall and only think about themselves while screaming at the retail worker because they didn’t have the right toy. We’ve lost the reason for the season.” – Tony Cappocchi

Get into the festive spirit and grab yourself a ticket to see Dragged Under when they arrive to play major headline gigs next year. Renowned for their exhilarating live performances, we can’t wait to see them tear it up on stage and prove why they are one of the world’s most exciting new bands!

Dragged Under tickets are currently available.