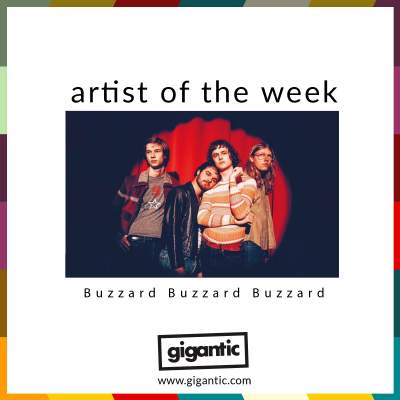 Bringing back the big riffs and outrageous attitude of 70’s glam rock, Buzzard Buzzard Buzzard and the Cardiff based band currently taking flight who are about to blow your mind. Having just released their ‘The Non-Stop’ EP which has been a huge hit with the critics and look set to be the biggest new band of 2020!

“The formative stages of glam-rock in the early '70s was and always will be huge for me, the music and style that came forward in those years is visually and audibly stunning. Electric Warrior is like Tutankhamen’s Tomb to me, it should be in museums across the world.” – Tom Rees

Cardiff based brothers Tom and Ed Rees are true children of the revolution, having been born into musical family with a father that was once onstage with The Bay City Rollers, flying the flag for the tartan army onstage. Those 70’s grooves deep in their veins flow to their fingers and into the fretboard which saw them initially become a studio-based band leading to the creation of their debut single ‘In Vain’.

“Myself and Ed are brothers, and our papa used to play drums for The Bay City Rollers back in the day, though I should clarify that it was when they were on their decline – bad times, long live Bay City.” – Tom Rees

Feeling like a fully-fledged band following the release of ‘In Vain’, they set their sights on global domination starting with a split 12” of their first song with fellow Cardiff innovators Boy Azooga and even appearing at Glastonbury 2019 on the BBC Introducing stage!

Continuing their meteoric rise, the flared guitar warriors have just dropped ‘The Non-Stop’ EP. The awesome ten track record kicks off with the single ‘Double Denim Hop’ which is a true life story about those that dare to wear the DD as singer Rees explains; “I had started wearing double denim (I of course thought it looked good but nothing else really throws other people of the scent of despair than TWO DENIM ITEMS hung on ONE PERSON ONLY) and wore it pretty consistently over the weekend that I was up there.”

“Anyway to cut what I have made a long story short, we were going to lunch somewhere and somebody was taking a photo and I decided to try some kung fu moves whilst they were snapping. Immortalised in film, was my first hop, I’ll never forget it. I posted the photo to Instagram and quoted it ‘that double denim hop’, obviously to impress the 20 or so followers I had at the time, but in turn gave myself the idea for the song. I kind of built the rest of the song up using all of that melodrama I felt living at home and popped it into this narrative that no matter your worries, if you just hop it off, it’s all cool, which I think has some truth in it.”

We are SO excited about the rise of Buzzard Buzzard Buzzard and with a brand-new record to show off, you can bet their upcoming shows are going to be AMAZING! Not only do they have their own headline dates lines up, but the glam rock revivalists will be appearing at the inaugural WIDE EYED festival which hits Leicester in February. Of course, Gigantic has tickets so click the link and book yours before they all go!  🦅