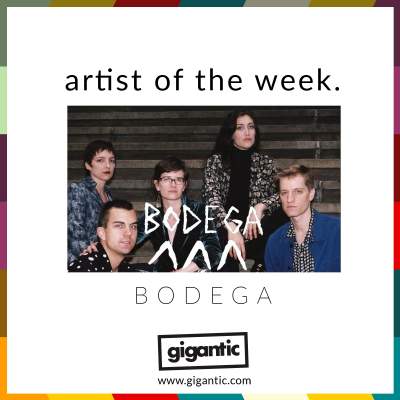 Leaning towards the disco fringes of post punk, New York based quintet BODEGA are fast becoming the band you play to friends to ensure that you get all the kudos. With the release of debut album 'Endless Scroll' this summer which has been supported by constant plays of the singles by BBC 6 Music, BODEGA have announced gigs at Nottingham’s Rescue Rooms and Scala London to support their new material.

The band began with the death of Ben Hozie and Nikki Belfiglio former outfit; Bodega Bay which they started in 2013 and released an incredibly large 55 track album 'Our Life Could Be Your Life' which they created using Garageband. However, dissatisfied with their material and wishing to address personal problems, the pair released that something needed to change and so began the process of cutting away all the detritus that they felt was getting in the way. The first chop came with the name and they became BODEGA in 2016.

“Ben and I got together one day and talked about all the things that weren't going right within our personal lives, and within the band that we were in, and sat down and made a Venn diagram of everything that we wanted for the future, for ourselves and for the music, and just transitioned over from that to BODEGA” – Nikki Belfiglio

Their debut LP ‘Endless Scroll’ has been a massive success and is a serious contender for album of the year. The recording process saw them draft Austin Brown of Parquet Courts fame to bring round the very same Tascam 388 tape machine as used to capture his band’s classic ‘Light Up Gold’ album and continue their efforts to cut out all the bullshit and take a minimalist approach to get to the very core of what they want to express.

“When we started this band, we started with the mantra of ‘radical honesty’. Most music has no accountability whatsoever. We have this thing called Pizzacore – bands that sing about eating pizza and smoking weed - that we make fun of, but it’s also a critique [of it]. People have so many choices that they’re afraid to make a decision now and we want to inspire a little more fearlessness.” – Nikki Belfiglio

The result is a streamlined record that carries absolutely no unnecessary weight, enabling BODEGA to rattle their hyper songs of angular riffs, jerky rhythms and dry wit at considerable speed – only slowing down at key moments like their huge single ‘Jack In Titanic’ and the nostalgia laden song ‘Charlie’.

With themes of retro futurism abound, their stripped-down sound and recording techniques are apt for an album which like a NYC response to krautrock, adding a bit of East Coast hip hop flavour and art rock influences their home city is so famed for. With songs like ‘Bookmarks’ discussing how the very machines create to make life more pleasurable somehow become a means of control, while ‘How Did This Happen?!’ and ‘Bodega Birth’ details how technology and media (social and conventional) is used to shape us into passive observers, ‘Endless Scroll’ sees the absurdity of how progress is being inverted into a new means of conditioning, preventing real participation and accepting servitude. Yet while carrying such a pertinent warning, their album never feels too stern or on the nose, allowing the disco punk beats to be played at any party.

“It just seemed obvious that we couldn’t write a contemporary record without talking about life on the internet. It’s almost not even a critique, it’s just that’s literally what it means to be alive right now. The mantra of Bodega is ‘the best critique is self-critique’ so if I’m criticising the internet, it’s not so much about it as this big abstract evil thing – it’s our personal use of it.” – Ben Hozie