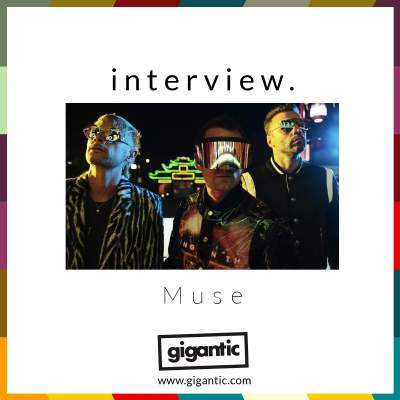 Muse: “It’s time to be more human” By John Earls

Known for their spectacular live shows which have pushed the boundaries of what technology can achieve in a rock concert, Muse are having a rethink. With a new stadium tour announced for next summer alongside dazzling new album Simulation Theory, bassist Chris Wolstenholme explains why the trio are thinking about a more human spectacle on the road.

Drones flying around arenas. Giant satellite dishes and floating cubes. Playing in an LED suit. Appearing to be eaten alive by their stadiums’ big screens… Muse have been at the forefront of making rock concerts as impressive as possible for well over a decade.

But, for stunning new album Simulation Theory, everyone’s favourite sci-fi rockers are planning a whole new way to make their stadium concerts spectacular. They have UK shows at London Stadium on June 1 and Manchester Etihad Stadium on June 8, and are already planning how to dazzle fans.

Bassist Chris Wolstenholme explains: “We’ve talked a lot about how maybe this tour is a good opportunity to step away from the technology side of things, and add some more human elements to the show. We could go down the road of having performers and make the show a little more theatrical.”

That’s partly as a reaction to the 18-month world tour for Muse’s previous album, 2015’s intense Drones. Chris recalls: “The Drones tour was so technology-heavy for the visual side, with drones flying around the arena. That worked great for that kind of spectacle, but we maybe need to get away from that a little and add some human elements. The performances of other people isn’t something we’ve really explored.” Muse’s first stadium tour in 2007 featured acrobats floating on balloons, and Chris explains: “We’ve done little bits with performers, but we’ve never pushed it that far and gone to town on it. It’s a whole world which can be explored.”

Former Talking Heads singer David Byrne’s recent arena tour had universal rave reviews for being more like a play than a gig, with dozens of performers across the stage. Chris saw it, and enthuses: “I was absolutely blown away by that show, being able to create something so spectacular with just performers. The technology in it was a very, very basic production, but I walked away thinking ‘Who needs big screens? Who needs amazing movie clips?’ It was just people, and it’s a good area to try to explore – having a spectacular show without technology.”

It's not just for the live show that Muse are branching out. New album Simulation Theory sees the band work with huge pop producers Timbaland (Justin Timberlake, Katy Perry), Shellback (Taylor Swift, Ariana Grande) and Mike Elizondo (Jay-Z, Pink), as well as reuniting with their old producer Rich Costey for the first time since 2006’s classic album Black Holes And Revelations. “It was interesting, getting different sounds to what we’d normally do,” says Chris. “Working with Mike on the first single, Dig Down, was probably the first time we didn’t all go to the studio with our instruments and play.”

Instead, the album began in singer/guitarist Matt Bellamy’s shed… “Matt has a shed in his garden with a studio. We spent a lot of time in there, messing around with music software like ProTools, to build up the song’s basic elements. We then sent that away to Mike, who did his thing – adding bits, changing sounds. We went to his studio four days later, and the song itself hadn’t changed at all. But it gave us different choices of sounds and styles. It was the same with Timbaland and Shellback. It was a different way of doing things that doesn’t take over what we do, but gives it a new twist.”

In fact, Muse’s approach was so different that they considered not releasing an album at all. They considered releasing a series of one-off standalone singles instead. Chris reasons: “The biggest conversation we had while we were touring Drones, about what to do next, was about how the music industry is very, very different to how it was 15 or 20 years ago. People listen to music so differently now, so we asked ourselves: ‘Is the album important? Is it something we need to do anymore?’” They worked on Dig Down and Something Human thinking those songs wouldn’t be on an album but, by third single Thought Contagion, began thinking of “a halfway answer” of releasing singles to later to be collected into an album “rather than releasing an album with a load of singles taken from it afterwards, which is what we’ve traditionally done.”

It’s a process which has helped make Simulation Theory more uplifting and poppier than Drones, with even the band admitting they were surprised by how dark that chart-topping album was. “You’re not always aware of certain things while you’re doing them,” Chris confesses. “We were obviously aware Drones was more of a guitar album, and probably the most retrospective album of our career. But, when I listen to Drones now, it is darker than I thought. Lyrically, sonically, musically; it’s all pretty dark. When we think about what to do next, we try to ensure it’s a step away from what’s gone before, and certainly none of us would have considered going even darker than Drones. So it made sense to make a record that’s a little bit more uplifting. That said, there are still dark moments on the new album. It’s not all ‘The birds are singing and the sun is shining’!”

Matt and drummer Dominic Howard turned 40 while making Simulation Theory, with relative youngster Chris celebrating his 40th on December 2. “The idea of going on tour to party all the time isn’t as appealing to a 40-year-old as it is to a 20-year-old,” he laughs. “In the early stages of a band, the scales are very much tipped in favour of the band coming first. You throw all your energies into the band, but then you find you don’t have much of a personal life.” Chris has six children, while Matt has a seven-year-old son. “If you don’t see your kids much and don’t have a personal life, it’s not sustainable for long.”

Although Muse have tried to balance touring with family life for the past few albums, Chris reveals Drones was “a heavy, long tour” and they don’t want to tour Simulation Theory to the same extent. “We made a conscious decision after Drones to do a lot of gigs for this album, but have adequate time at home in between. We really value both being a band and having a personal life.”

Part of staying focused on tour is down to the technical side of Muse’s shows – like actors, the band need to hit their mark at certain points to allow the spectacular elements to go off around them at the right time. Chris laughs: “Touring our first two albums, we’d just turn up with a van, unload a couple of amps and Dom’s drums, then plug in and play and that’s it. There’s a lot of thought goes into our shows now, and it’s not that easy anymore! Certain things have to happen at certain times onstage, so you’re aware you’re part of this show that has a flow, and that you’re an important part of that. You have to be on the ball, so you can’t live your life drinking, taking drugs and whatever young bands do.”

Muse met at school in Teignmouth, Devon, but Chris’ early childhood was in Rotherham. He remains a hardcore Rotherham United fan, and it’s not lost on him that Muse’s UK stadium shows are at West Ham United’s ground London Stadium and Etihad Stadium, home to Manchester City. “Being a Rotherham fan, I don’t usually get the luxury of visiting such amazing stadiums,” chuckles Chris. “We’re struggling to avoid relegation from the Championship, and I don’t see us going to Manchester City anytime soon! But, as a football fan, it’s great that the band get to play at such places. When we last played at the Etihad, our dressing room was City’s home dressing room. The tactics board was still out, so I could see all the formations up there, with drawings of where certain players were supposed to make their runs. I thought ‘Wow – the last time anyone saw this was when Manchester City won the Premier League!’ That’s fascinating, and I hope the board is left out for us again, so I can see how Pep Guardiola does it…”