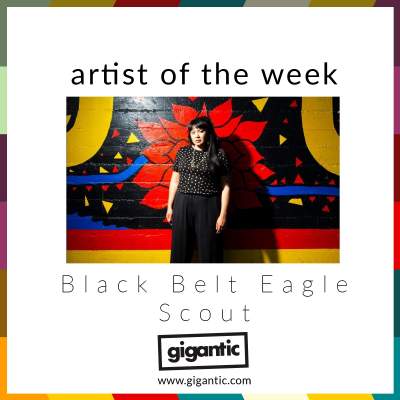 Black Belt Eagle Scout is the stage name of 30-year-old multi-instrumentalist songwriter KP (short for Katherine Paul). There is an ethereal quality to her sound that includes breathy vocals and minimal indie pop guitars, which is a sumptuous backdrop to her powerful messages.

Her queer identity plays a central role to her music, as does her Native American heritage and her experiences or deeply intertwined into her music as heard on debut album ‘Mother of My Children’ plus her formidable follow up record ‘At The Party With My Brown Friend’ which was named ‘Best Rock Album of 2018’ by Pitchfork. Combining the personal and the political, KP uses her music to ensure issues of violence against Indigenous people and abusive of their rights cannot be ignored with her radical feminist narrative deeply embedded in the lyrics.

“The one thing I really want people to know about me is that I want there to be more space for Indigenous artists, and I’m going to work really hard to try and have that”

KP grew up on an Indian Reservation at Puget Sound, where she would develop a taste for grunge alongside her cultural teachings and would learn how to play Nirvana songs alongside with drumming at gatherings and spiritual events. KP would develop the skills and create her own unique sound as heard on her ‘Black Belt Eagle Scout’ EP in 2014 which had become her moniker.

“I grew up on the Swinomish Indian Reservation in NW Washington state, learning to play piano, guitar and drums in my adolescent years. The very first form of music that I can remember experiencing was the sound of my dad singing native chants to coo me to sleep as a baby. I grew up around powwows and the songs my grandfather and grandmother sang with my family in their drum group. This is what shapes how I create music: with passion and from the heart.”

In 2017, KP released her debut album ‘Mother of My Children’. Whilst relatively short including only eight tracks, it certainly wasn’t lacking in terms of emotional impact. The title track is a swirling masterpiece, ‘Yard’, ‘Indians Never Die’ and ‘I Don’t Have you In My Life’ have a gentle strength to them plus the album opener ‘Soft Stud’ and ‘Just Lie Down’ have a powerful raw edge to them.

During this time, KP became involved with the protests resisting the development of the Dakota Access Pipelines which saw the natural beauty of the Standing Rock Indian Reservation decimated by oil companies. Native Americans from across the US rallied in support, taking to social media to raise awareness after their complaints were ignored by the government plus taking direct action to prevent further development which ignored Indigenous sovereignty and tore apart the wilderness for ecologically damaging profits. Those that took part in the protest actions were demonised and criminalised by the authorities with the law twisted into a political weapon for monetary gain. While their efforts would ultimately fail owing to white corporate developers being protected by an increasingly militarised police force going on the attack, it would cement feelings of solidarity amongst Native Americans who united for a common cause.

KP shared these mixed feelings of sadness, frustration yet also a sense of unity brought about the struggle. However, she also had personal turmoil to reconcile including the death of her mentor; illustrator and musician Geneviève Castrée plus the breakdown of a serious relationship with her long-term partner. These experiences would directly inform the music she was currently working on which would eventually become her second album ‘At The Party With My Brown Friend’.

“After the release of ‘Mother of My Children’, I felt awake and desperately wanted to put new music out into the world. I had no real intent behind ‘At the Party With My Brown Friends’ except creating songs around what was going on in my life. In the past few years, the reciprocal love I experienced within friendships is what has been keeping me going.  A lot of what is in this album deals with love, desire and friendship.”

‘At The Party With My Brown Friend’ is an enchanting record which takes a more delicate approach to its predecessor. Whilst softer in tone, her second LP is also a true development in sound and paints very vivid pictures of personal experiences through lush and beautifully echoing guitar led songs.

“Throughout the course of my writing and playing around this record, most of these songs deal with relationships I have either with loved ones or friends. I think it low key has to do with my anthropology degree, but also the fact that writing and playing guitar in my bedroom just makes everything feel better for me. For the longest time, I wanted to convey my feelings around coming out to my family. It had been a good experience for me and while I know it is not always that way when kids decide to tell their family, I think that we can open our hearts more for that. I would watch YouTube videos of moms being proud of their kids surrounding their sexuality and gender identity and I really wanted to raise my voice to say, ‘my family too!’ What started with trying to sound so literal in this song ended up turning into a song about how much I love my mom and how our connection is eternal. “You’re Me and I’m You” is about being one with your mother, since we all were a part of their bodies at one point. It’s me trying to explore who she is and who I am with my love for people.”

All parts were written and all instrumentation was recorded by KP and put to tape by Benjamin Weikel and Brandon Summers (The Helio Sequence) at their boutique Helio Sound studio in her Portland hometown over an extended period which lasted from July 2018 till March 2019. ‘At The Party With My Brown Friend’ was initially released by Portland tape label Good Cheer Records in 2017 before Saddle Creek re-released it in September the following year on MP3 and vinyl.

Do not miss your chance to see Black Belt Eagle Scout when KP plays captivating performances at Manchester’s The Deaf Institute and Colours in London later in the year. Tickets on sale with Gigantic right now!