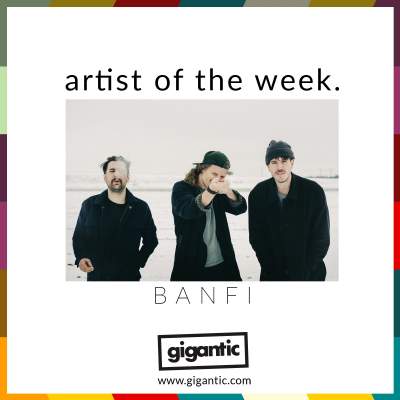 Led by their namesake Joe Banfi; BANFI are the rapidly rising three-piece attracting widespread attention for their emotionally charged indie rock which has a deep vein of melancholy running through their infectious rhythms.

Today sees the release of their brand new single 'If Not For You' which they celebrate with a massive party at The Windmill in Brixton this evening with support from South London based duo Bad Parents whose members include famed post grunge song writer Misty Miller and Tom Shelton plus drinks provided by Signature Brew.

With a tour coming up in November, we take a closer look at your new favourite band; BANFI.

“There’s a very specific emotion that is really important to us, which I don’t like to label but kind of feels like a tension between gratitude and regret in relation to memory and harvesting future memory. The tension feels off balance because you can’t understand it properly, like the edge of a coin. My favourite music and stories bring out that tension and make me cry in a way I don’t understand. So, all the drum grooves and chord harmonies and lyrics and progressions take from any kind of influence that is going to help in the pursuit of that feeling.” – Joe Banfi

Based in Leytonstone in London, BANFI are Aaron Graham, Chris McCuaig and Joe Banfi. The band first formed in 2015 after a chance meeting for a short-lived project which never came to fruition. The trio stuck together and posted their highly accomplished debut single ‘Where We Part’ onto Soundcloud which immediately set the stage for a band which was clearly driven and ready for the big time.

“Aaron and I met quite formally through a management company, but then that project – we’d initially met for – fizzled out and we started BANFI together, working on bedroom demos at first and then Aaron knew Chris through a friend and we started rehearsing for live shows.” – Joe Banfi

‘Where We Part’ would be the first song to exhibit their high-quality output which would follow over the coming years, such as their massive quirky hit single ‘Happy When You Go’ with further stand out tracks including echoing yet punchy single ‘She Comes Home’, the anguished heartache of ‘Caroline’ and the atmospheric ‘Never Really Cared’, taken from ‘The Jack Powell’ EP which was released earlier in 2018.

Each release has seen a massive online reaction with YouTube streams totalling over 100,000 and a further 76,000 monthly listeners on Spotify. This massive presence on the internet has seen them reach a global audience, making them a truly international phenomenon.

“It’s very important to us that people connect with the songs. Anyone who does care about whether other people like their music is fundamentally misunderstanding the point of making music at all. It’s to offer people something to communicate to other people with, so if out of all the views and streams there are people in there who are really connecting to the song then that’s very important to us.” – Joe Banfi

This year has seen BANFI commence their Spring tour across central Europe, playing dates in the Netherlands, Germany, Austria and Switzerland before returning to the UK to show their stuff at Edinburgh, Manchester, Bristol and London, recruiting many more fans wherever they appeared.

It proceeded a summer which saw them take a more stripped-down approach with an international acoustic tour on which they played where and whenever they were invited before joining the Signature Brew Bar Crawl with whom they have previously released their own craft beer, merrily playing unlpugged sets to crowds across such fantastic East London pubs as The Leyton Technical, The Leyton Star and Four Quarters Hackney – all in a single day!

Autumn sees BANFI head on over to tour the continent once again to the delight of their foreign fans. But don’t worry! You’ll get your chance to see them when they kick off their domestic dates in November. Tickets are currently on sale with Gigantic so grab yours right now!