All Rails Lead To Indietracks 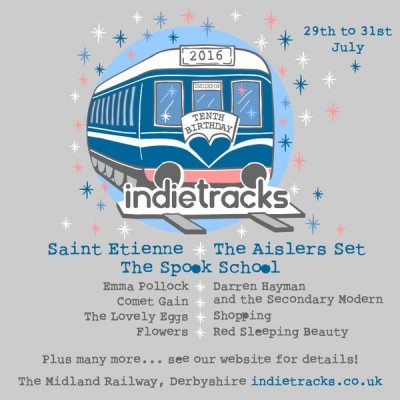 This year the wonderful Indietracks is ten years old. Taking place at the Midland Railway Centre nestled in the heart of the beautiful Derbyshire Countryside, the festival is a fantastic place to see some truly alternative artists you wouldn’t see anywhere else.

To celebrate becoming double digits old they have already announced a great line up including the triumphantly queer sound of The Spook School, indie disco favs Saint Etienne and the endlessly endearing music of The Aislers Set.

But we’ve just had word of some more cool acts they’ve just announced. Let’s have a gander at the best and all the rest just added.

They’ve only gone and booked Comet Gain! Sometimes a bit post punk, sometimes kind of northern soul but always a lot C86. They’ve drawled their way through just about every label worth mentioning having made releases on Wiiija, Kill Rock Stars, Track & Field and Fortuna Pop!

In need of a bit of punk naughtiness? The Lovely Eggs are an inglorious trashy mess in the most wonderful sense. Holly Ross and David Blackwell songs have a bit of that kitchen sink drama feel blasted out with a distortion pedal or two.

Emma Pollock will be gracing the Indietracks stage. Since signing to 4AD since her previous band The Delgados decided to call it a day she has gone on to release some outstanding records including In Search Of Harperfield which only came out this year.

Nervous Twitch are an absolutely perfect addition to Indietracks. Having torn around the country infecting all with their catchy 60’s influenced punk riffs they’ve started to build a bit of a cult following. See you at the front!

With a real community feel and playing truly alternative music, this festival remains fiercely independent and is all the better for it. Charming, beguiling and a whole load of DIY fun.

Indietracks takes place from Friday the 29th till Sunday 31st of July. Tickets can be bought just by clicking HERE.