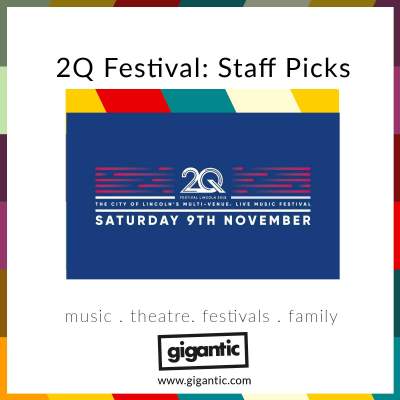 Gigantic is passionate about live music and we cannot wait for the huge all dayer 2Q about to hit the very best venues of Lincoln on Saturday 9th of November. Offering an incredible selection of major names plus essential cutting-edge acts on the rise right now – it’s a massive festival celebrating the best bands and performers of 2019.

Expertly curated, the huge headliners include Brummy indie legends The Twang, acclaimed blue rock duo Band Of Skulls and returning post punk revivalist heroes The Futureheads. If that wasn’t enough, you can look forward to seeing some of the years most vital breakthrough bands including Crows, Yonaka, Working Mens Club and The Blinders – plus many more!

The more you look at the line-up, the better it gets! It is just rammed full of awesome acts meaning you are guaranteed to have an amazing time at one of the last festivals of the year. And if you’re a little overwhelmed trying to work out who to see, our staff members are on hand with their top picks of who is playing.

“Nottingham has an exceptional music scene and produced so many great acts, and none better than Do Nothings who have become the breakthrough band of 2019. A little bit like Talking Heads with an added dash of The Strokes plus a twist of The Fall all add up to a truly potent cocktail.”

“I love rock and so I’m a fan of anything with a guitar turned up nasty and loud but I like a bit of pop now and then too which is why I really enjoyed YONAKA’s killer debut album ‘Don’t Wait ‘Til Tomorrow’ which came out this year. I’ve heard good things about their live sets so looking forward to seeing them.”

“Any band featuring fierce woman is definitely what I’m about and Black Honey have this rebel spirit which totally appeals to me. They keep getting bigger and bigger so this might be my last chance to see them before they start moving up to playing arena tours.”

“Seriously, this festival has so many killer bands playing that I absolutely love. I’ll definitely be seeing the strange alt rock of Kagoule, fiery post punk from LIINES and October Drift who are poised to become massive. But if I have to choose just one, then it’s the unhinged riotous mania of Bristol boys Heavy Lungs – every gig they play explodes!”

“Really loving the new Jaws record ‘The Ceiling’, it’s such an emotionally powerful record with some great punchy numbers too which has really taken the band to the next level. They have been on the cusp of greatness for a while now, and I think this is even a contender for album of the year!”