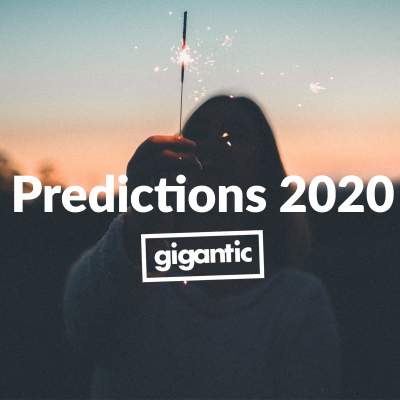 Welcome to a brand-new year and with it comes a whole world of new possibilities and exciting twists and turns in music. Gigantic has some (not so accurate) predictions for the year ahead, so keep scrolling and to see what might just be in 2020.

Everyone has heard of Fyre. The luxurious festival on a tropical island in the Bahamas that was reserved only for spoilt brats and the over privileged that turned out to be the biggest mess up of all time. It was such a calamity, it even had a Netflix documentary detailing just how close the whole thing came to a deadly disaster when there wasn’t enough food and water coming to the island to sustain all the rich revellers and just what lengths unsung hero Andy King was prepared to go to save the day.

But no news is bad news, right? And now Fyre is SO famous it would be a real mistake not to do the whole thing again. I mean, what could possibly go wrong?! Hope you like cheese sandwiches…

Everyone loves Macca but who cares about all those dusty old Beatles songs? Don’t worry, he’s gone and booked his old mate Ringo to join him on the Pyramid Stage and we’ve been given a sneak peek of the set list and we can confirm they will be doing a happy hardcore re-working of Thomas The Tank Engine theme tune plus everyone’s favourite banger ‘We All Stand Together – The Frog Chorus’.

It gets earlier every year and so Mariah Carey and her crack team of marketers have come up with the genius idea of re-releasing everyone’s favourite Crimbo jingle in June. The sheer genius of unleashing ‘All I Want for Christmas’ in summertime is definitely going to catch everyone by surprise and sure to send the single back to No. 1 worldwide!

“A circus of the grotesque and unholy” – The Independent

“A purr-fectly dreadful hairball of woe” – The Guardian

Following such rave reviews from the public for his appearance in the new motion picture adaptation of hit West End stage show Cats, James Corden is pushing the envelope even further and bringing it back to the stage – as a one-man production. Known for is insightful comedy and sensitive nature, Corden has picked the play apart and has chosen to focus on the life for felines after being spayed with a costume specially created for him after undergoing painstaking research with online Furry cosplay communities. Performances have been scheduled in working men’s clubs all around the North East in March – book your ticket before they all sell out!

Finding the pressure of being the world’s nicest guy too much, our favourite floppy haired hunk Keanu Reeves finally snaps and goes on the rampage screaming in fans faces, tipping over vending machines to steal all the Mars bars and crashing a stolen milk cart into the front of an Oxfam in the high street of Durham during the subsequent sugar high. Expected to serve a minimum sentence of four years, Reeves will also have to attend the Britney Spears Clinic of Celerity Meltdowns before being allowed back into society.