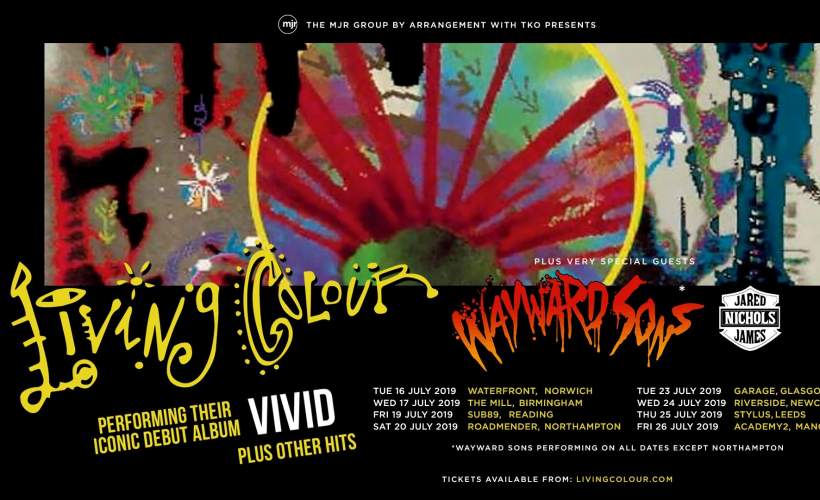 Can Living Colour do a bad gig? Doug seemed off sorts but still played like the god he is. Venon is always Vernon. Corey is always one of the best singers around. And Will is just awesome on drums. The sound guy needed a kick to get the mix right but still a brilliant, brilliant gig.

Living Colour are one of the best bands in the world. Fact. Their performance tonight was phenomenal. Their musicianship is awe-inspiring. Their show was full of fun, inspiration and pure musical magic.?

Tickets came in good time, a fantastic night was had by all Living colour were brilliant!!

We had a wonderful evening, we saw them twenty odd years ago at Leeds university and although they look a bit different their sound is just the same, brilliant!

Great band audience pathetic I will not return to the Rescue Rooms.

NYC rock band Living Colour proved their importance in the 80’s and have grown in stature as the years have passed.

With the imminent release of their forthcoming sixth studio album Shade they have announced an exciting Autumn tour which takes them to Norwich Waterfront, The Mill at Birmingham, Sub 89 at Reading, The Roadmender at Northampton, The Garage at Glasgow, Leeds Stylus and Manchester Academy 2 during July 2019.

They will also appear at Steelhouse Festival 2019 which takes place at Hafod-Y-Dafal Farm form Friday 26th to Sunday 28th of July.

Living Colour tickets are going to fly off the shelves so be quick and book yours before they are all gone.

They have a fantastic back catalogue starting with debut album Vivid which they brought out in 1988. Further album titles include Time’s Up, Stain and Collideøscope.

Their latest release was the album Shade which came out in 2017. The music press were quick to recognise what a gem it is.

“All told, a rebel-rousing cut above today’s sludge.” - Record Collector

“Frankly, Shade sounds like the band is still ruling the world, such is their confidence and skill level here.” - Pop Matters

We only have limited supplies of Living Colour concert tickets on sale so be sure to book yours quickly through computer or on your smartphone. Gigantic has been proudly providing excellent customer service for ten years so you know we are the trusted place to book your essential gig tickets whenever you are planning your big night out.

During the 1980s, rock had become completely segregated and predictable, the opposite of the late '60s/early '70s, when such musically and ethnically varied artists as Jimi Hendrix, Sly & the Family Stone, and Santana ruled the Earth. But bands such as New York's Living Colour helped break down the doors by the end of the '80s, leading to a much more open-minded musical landscape that would eventually pave the way for future bands (Rage Against the Machine, Sevendust, etc.). The group (singer Corey Glover, guitarist Vernon Reid, bassist Muzz Skillings, and drummer Will Calhoun) first formed in the mid-'80s, with Reid being the only member with real prior band experience; he was a member of Ronald Shannon Jackson's experimental jazz outfit, and had recorded with Defunkt, Public Enemy, as well as issuing a solo album with Bill Frisell, 1984's Smash & Scatteration.

It took the fledgling band a few years for their sound to gel, as they honed their act at N.Y.C.'s famed CBGB's. But the group found an unlikely supporter in Mick Jagger, who took the band under his wing, produced a demo for the quartet, and helped them secure a record deal with Epic (just prior, Glover had to take a brief leave of absence from the band, as he landed a role in Oliver Stone's Vietnam War epic movie, Platoon). Living Colour's debut album, Vivid, was issued in the summer of 1988, yet it would take a few months for momentum to build. By the winter, the band's striking video for their anthem "Cult of Personality" was all over MTV, pushing Vivid to the upper reaches of the charts and to platinum certification. Living Colour also took home their first of several Grammy Awards, as "Cult" won Best Hard Rock Performance at the 1989 ceremony, and the band supported the release with a string of dates opening stadiums for the Rolling Stones' first U.S. tour in eight years that autumn.

Starting with Vivid and continuing on future albums, the band showed that rock could still convey a message (as evidenced by such tracks as "Open Letter to a Landlord," "Funny Vibe," among others). The quartet regrouped a year later for their sophomore effort, Time's Up, an album that performed respectably on the charts but failed to live up to the expectations of their smash debut. An appearance at the inaugural Lollapalooza tour in the summer of 1991 kept the group in the public's eye, as did an EP of outtakes, Biscuits. Skillings left the group shortly thereafter (replaced by studio vet Doug Wimbish), as their darkest and most challenging release yet, Stain, was issued in 1993. Although it failed to sell as well as its predecessors, it retained the band's large and dedicated following, as Living Colour appeared to be entering an interesting and groundbreaking new musical phase of their career. The band began writing the following year for what would be their fourth full-length, but an inability to settle on a single musical direction caused friction between the members, leading to Living Colour's demise in early 1995.

In the wake of Living Colour's split, all of its former members pursued other projects. Reid issued a solo album, 1996's Mistaken Identity (as well as guesting on other artists recordings), while Glover attempted to launch a career as a solo artist, issuing the overlooked Hymns in 1998 and finding time to appear as a VJ on VH1 and acting in the 1996 movie Loose Women. Calhoun and Wimbish remained together and launched a new outfit, the drum'n'bass-inspired Jungle Funk, who issued a self-titled debut release in 1997 (Wimbish also issued a solo album, Trippy Notes for Bass, in 1999). With Living Colour out of commission for several years by the early 21st century, Calhoun and Wimbish teamed up once more with Glover in a new outfit, Headfake, playing often in the New York City area. A few days before Christmas in 2000, Headfake played a show at CBGB's, and were joined on-stage by Reid, which led to rumors of an impending Living Colour reunion. The rumors proved to be true, as Living Colour launched their first tour together in six years during the summer of 2001. In 2003, Living Colour returned with a deal with Sanctuary and their most experimental release to date, Collideøscope. Two years later the rarities collection What's Your Favorite Color? was released, followed by Everything Is Possible: The Very Best of Living Colour in 2006 and the recent Chair in the Doorway in 2009.

The band recently announced the title of their new album: “Shade”, and they celebrate with a tour set to kick off September 18 at The Opera House in Toronto, Ontario, Canada.

Corey Glover, Vernon Reid, Doug Wimbish and Will Calhoun are currently in the studio putting the finishing touches on “Shade” which is being produced by Andre Betts and mixed by Ron Saint Germain.

Due in the fall, “Shade” follows 2009′s “The Chair In The Doorway” and is LIVING COLOUR’s sixth studio album.

“‘Shade’ is the sound of a band coming to terms with its shadows and light,” says Reid. “From the blue pulpit of Robert Johnson to the mean red streets of Brooklyn to the golden lure of Hollywood, ‘Shade’ is the next chapter of a unique American journey.”