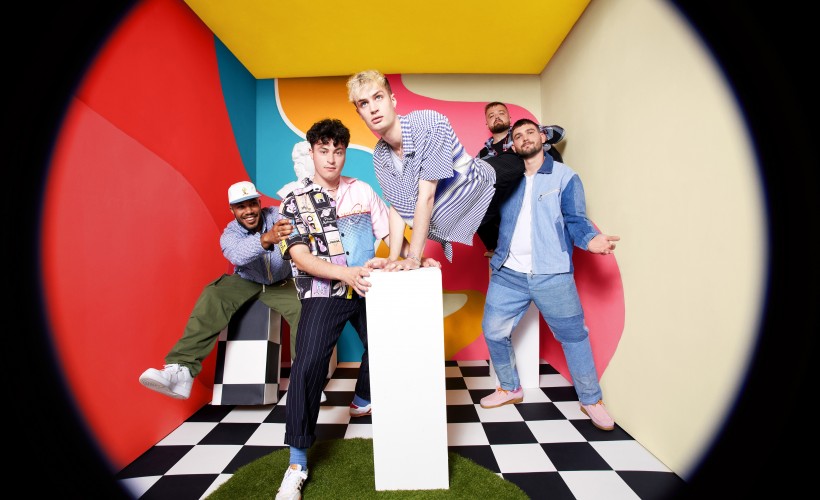 Performing at NECK OF THE WOODS Earlham Park, Norwich

Tweet
Starting their musical journey while studying in Leeds, North London duo Jim (vocals) and Dan (acoustic guitar, vocals) quickly developed a distinctive sound. Deriving from their joint love of close vocal harmony, and rhythmic finger-style acoustic guitar, the pair started writing songs inspired by the likes of Bombay Bicycle Club and Half Moon Run. After breaks on platforms such as Mahogany sessions as an acoustic indie-folk act, they quickly moved back to London with aim of expanding their sound. Now backed by a full band of Ben (drums), Reeve (bass) and Dan Lee (electric guitar), KAWALA have started making waves in the live scene, finding inspiration from a range of musical styles. The sound has developed through the use of afrobeat-esque drums, atmospheric electric hooks and strong rhythmic bass, yet still maintaining the focus on the core indie-folk two part vocal and acoustic.

KAWALA will be playing The Bullingdon at Oxford, The Globe at Cardiff, Cardiff's Thekla and O2 Forum Kentish Town in London during December 2021.

North London’s history of producing era-defining artists is one that can lay claim to some of the UK’s brightest talents, from Madness to Amy Winehouse, Adele to Wolf Alice. Now, KAWALA - one of the country’s most promising new bands - are the latest to put themselves forward for inclusion in that lineage.

Centred around the core duo of singer Jim Higson and guitarist/singer Daniel McCarthy, KAWALA aren’t your typical band. Their lush sound is cushioned with the pair’s gorgeous harmonies, driven by Daniel’s unique finger-style acoustic guitar playing, and inflected with sounds from genres far beyond the one they inhabit. In the current landscape of popular music, they stand as exciting outliers, carving their own path.

Their road might have begun in North London, where Jim and Daniel moved in the same social circles as teens, but their journey didn’t gain proper direction until they both enrolled at Leeds College of Music in 2014. Until then, they’d spent parties and hang outs back home always talking about doing something together but never getting round to it.

“Leeds is what pushed us to stop talking about doing music and actually do it,” explains Daniel. “I would argue we’d never have done it otherwise.”

After swapping music they were into by the likes of Half Moon Run, The Staves, Fleet Foxes, Blaenavon, and Bon Iver, they quickly realised they were on the same page creatively. They began to write and gig together, and soon took the decision to drop out of uni and move back to London. “We knew what we wanted to do already and being on the course just meant that we couldn’t do that,” Jim reasons.

They wrote and gigged together as a duo, occasionally with now-drummer Ben Batten on cajon. The format proved successful with them booking shows across the UK and Europe, but they soon felt they’d hit a ceiling. “There was a limit to where we could take it,” Jim says of their old set-up.

“You’re never going to be last on as an acoustic act so we wouldn’t be able to work our way up the bill,” Daniel adds. “That’s absolutely no disrespect to the acoustic scene because that’s where we cut our teeth, but we got in a bit of a rut playing churches and acoustic Sundays.”

It was at this point, KAWALA got what they call their “first ever win” - attention from the people behind the YouTube channel Mahogany Sessions. They joined the likes of Laura Marling, Bastille, and Michael Kiwanuka in recording a live session for the channel and then became Mahogany’s first signing when they launched a record label.

With their own taste in music developing, they decided to invite some friends to join them in the band in an attempt to also expand their opportunities. With Ben now on a full drumkit, they also recruited bassist Reeve Coulson and guitarist Dan Lee. These additions not only helped them move into new territory gig-wise but also brought fresh sonic inspirations to nestle into the KAWALA sound. They credit Ben’s love of Afrobeat and Highlife as helping them highlight those rhythms in their music, while Reeve Brings an influence, however subtle, from the world of drum and bass, and Dan Lee’s intricate yet tasteful electric guitarwork brought new textures to the sound. “They’re absolutely integral to the band,” Jim says of the now-settled line-up. “We got so lucky with them.”

Following the success of the session, it was with Mahogany that KAWALA released their debut EP ‘D.I.L.Y.D’ (or ‘Do It Like You Do’) in 2018, which immediately set out what they were about - sad but optimistic indie with heart, rhythm, and harmony. That record and 2019 follow-up ‘Counting The Miles’, coupled with their infectiously joyous live shows, have secured them a growing and loyal fanbase - one that has started to provide a haven for outsiders.

“We didn’t get into music to make an angled statement to change the world,” Daniel explains. “But what I’ve found at our gigs this last year is this surge of people who don’t feel 100 percent accepted in society. We see people with Pride flags at our shows and we get messages saying, ‘Your music helped me’. That’s better than anything.”

They put people finding comfort in their band down to the nature of their music. “It’s hopeful,” Jim says. “We have a lot of songs where there’s a journey, like each song on ‘Counting Miles’. I think that’s a good message people can grasp, even if it’s just something as basic as finding yourself going from being unhappy to happy - that’s a journey in itself.”

Building a community around their band is something KAWALA have already begun to do in London. Their friends and family are also their collaborators - their friend Frank created the artwork that adorns their EPs, backdrop at their shows, and their merch, while Jim’s brother directs their videos. “If you know someone who can do it, there’s no point getting a big name to do it,” Daniel reasons. “It’s nice to have that community. “There are artists we know in North London as well - rappers, musicians, photographers, artists and other bands in a similar place to us - that we can feel a sense of togetherness with.”

darker, dynamic ’Animals’ as being KAWALA’s “Lizzo moment”, in which they reassure someone they “don’t need that abusive male in your life”.

Lead single ‘Heavy In The Morning’, meanwhile, tackles exactly what the title suggests - that feeling of not being able to get out of bed in the morning and face the day. “It’s broader than just being about mental health,” Daniel explains. “It’s more of a general feeling - that can’t be bothered feeling.”

Although they describe writing lyrics as being “one of the hardest things”, especially considering both Jim and Daniel sing every line, they got some reassurance in their methodology recently. “We’ll usually pull lyrics out of what sounds right,” Jim says. “I was always a bit uncomfortable about that until I read a book that said that’s what Paul McCartney and John Lennon used to do.”

“It’s easy to write lyrics when you care about what you’re writing about,” Daniel adds. “We can make sounds all day long but the songs that have hit people best have always been the ones where we knew what we were talking about. We both had a lot we really wanted to say on this EP.”

With early support from the likes of NME, BBC Radio 1’s Jack Saunders, and Clash, plus support slots with George Ezra, The Vaccines, and Dodie, a Main Stage set at Reading & Leeds 2019, and their own sold-out headline shows across the UK under their belts, the future looks very bright for KAWALA. Their aims, though, are humble. “If we keep making music that people enjoy, that makes me happy enough to keep doing it,” says Jim. He pauses, then adds completely straight-faced: “Also world domination.”


Expect euphoria. Expect your mind to be expanded. Expect the unexpected. Get your KAWALA concert tickets now before they’re gone! Gigantic has a huge array of essential gig tickets so stick with us for a fantastic experience.