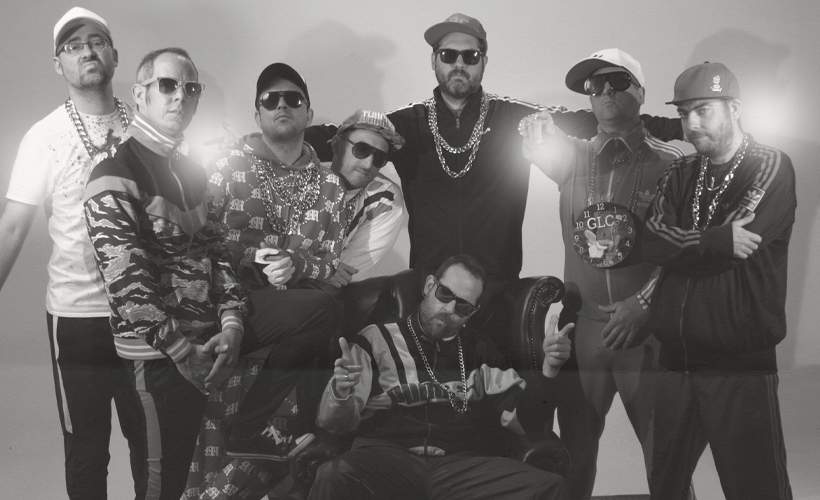 Your favourite faux gansta rappers Goldie Lookin' Chain are back on the road and tearing it up at every service station from Lands End to John O'Groats!

JUST ANNOUNCED! Newport's notorious mafia will mash it up at Metronome, Nottingham on Saturday 8th January 2022,

Comedy hip hop group Goldie Lookin' Chain have risen to infamy with their hilariously biting tracks. The Welsh group have prolifically written and recorded new material which has won them fans all around the world. Coming from Newport, they give a sardonic account of life in South Wales and UK culture. They recently returned with their exciting new record Pill Communication which was promoted by exciting live dates.

The hardworking group had already released their first six albums before they were signed. With the backing of record label East/West their single Half-Man Half-Machine broke the Top 40 in the UK Singles Chart in May of 2004. In August of the same year they released their breakthrough single Guns Don’t Kill People, Rappers Do. The satirical song sent them to #3 in the charts.

Now firmly planted in the people’s consciousness, they released their seventh album which was the first to come from a label. Ironically titled Greatest Hits despite having only been discovered by most, the album rose to #5 in the UK Albums Chart. The final singles featured on the album are the #14 song Your Mother’s Got A Penis and You Knows I Loves You which rose to #22.

The GLC have continued to release albums at an industrial rate, and their output includes the #16 album Safe As Fuck, Asbo4Life and their latest release Pill Communication.

Tag Gigantic in your pics and vids plus use #GiganticGigGoer to share your magic music moments with the world!

Get ready for fantastic events coming your way!

Great entertainment and performance. Terrific value and I always look out for the next GLC experience.

Verified purchase
The boys still got it! You knows it!

So entertaining. Venue small enough to get totally absorbed in the performance. The guys came out a mingled with the audience after the gig. A fun night, still smiling 36 hours later 😁

Superb venue great crowd and GLC are priceless ... A group of 10 of is went and we all loved it.... Keeps it up With loves from the sofa with my jams on Simon

That's all we have for Goldie Lookin Chain ! Check out their upcoming shows