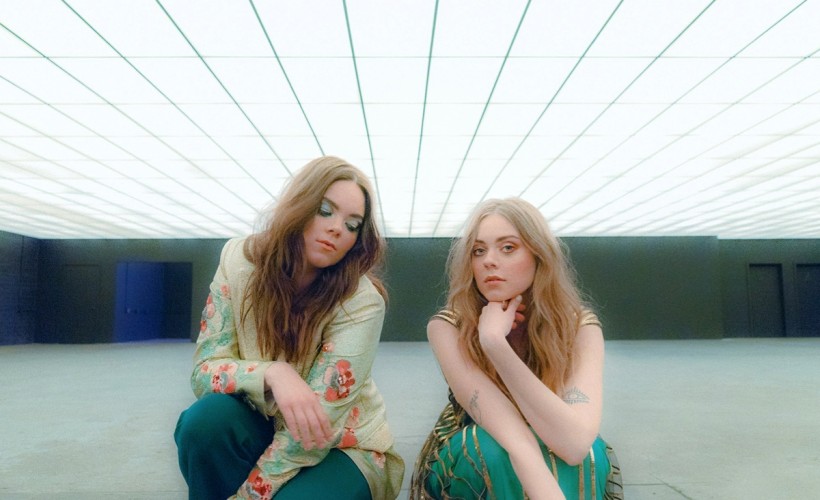 "Straight into my top 5 shows ever!"

Very good show - and especially the 'halloween' dressing up - Glinda and Dorothy, and the rest of the band as other Wizard of Oz characters!

"Wasn't sure what to expect from the performance.."

... we saw two mic's on stage before they came on and I was unsure how lively it would be ... but... what a surprise, and a halloween special. The Staves performing with them was a highlight too


First Aid Kit, consists of sisters Johanna Soderberg and Klara Soderberg, released their debut album 'The Big Black & The Blue' in 2010, which began to bring the band to prominence, but it was their 2012 follow-up 'The Lion's Roar' that really put the sister duo on the map due to its commercial and critical acclaim. Their third album 'Stay Gold' went even further to spread their name and their upcoming LP ‘Ruins’ expected in 2018 will certainly sky-rocket the group to worldwide fame.

As the word spreads, the demand for First Aid Kit tickets grows so we really urge you to make sure you book yours early to avoid disappointment! Placing an order is made easy with Gigantic as you can access our easy-to-use site 24/7 with a computer, tablet or smartphone whilst busy on the go or from the comfort of your own home.

With more and more people discovering the thrill of live music, it is becoming even more important to be ready for the release of your favourite tickets. Set a personal reminder with Gigantic so we can send you a text message or an email just prior to when The Alarm gig tickets are made available at 10:00 on Friday 10th of August.


Ruins was made with one target in mind: make it sound more real. In many ways, First Aid Kit's largest asset is their biggest problem. Their voices are so damn pretty. “The records were always so perfect,” says Johanna. “We don't want it to feel perfect. We want it to feel rough, gut-wrenching.” Given the material, the lyrics had to be the focus. These sentiments didn't need to be dressed up. They needed to be naked.

Four years ago, lyrical ideas began to stem from Klara's Manchester life, particularly the end of her engagement. “We'd been on a break from music,” says Johanna. “Not listening, not writing.” During a trip to Los Angeles last Spring, just after Klara's breakup, they hunkered down for six weeks to gather inspiration. They went to Joshua Tree to a house as decimated as their hearts. “All you could hear was a storm outside,” recalls Klara. The place was filled with Ouija boards and tarot cards. “We were kind of freaked out.” Nothing was as scary as the reality they had to face in the studio. Lead single “It's A Shame” was written during that time. It's a song about the desperation of loneliness. “It's also about being in L.A.,” adds Johanna. “Everything's so beautiful but we felt like shit.” At their most prolific yet, they came away with more ideas than ever.

Long after Los Angeles, in January of 2017, they committed those songs to record, working with Tucker Martine (My Morning Jacket, Laura Veirs) in Portland. “There was an ice storm. It was terrible!” recalls Johanna. “No one could go anywhere, you couldn't drive, you couldn't walk. We were just stuck in the studio.” Locked in with a group of amazing musicians - McKenzie Smith of Midlake, drummer Glen Kotche from Wilco and REM's own Peter Buck - they set the demons free.

With demand staggeringly high for our limited supplies of First Aid Kit concert tickets, you will need to book early. Gigantic offers great customer service on all your essential gig tickets, so make us your first choice when looking to book your big night out and look forward to enjoying an unforgettable experience.

Following their sold out date at London's Islington Assembly Hall this week, the celebrated folk duo have announced a string of September headline shows in support of their brand new album 'Stay Gold'. The dates will include a night at London's Royal Albert Hall on Wednesday 24th September.

First Aid Kit, consists of sisters Johanna Soderberg and Klara Soderberg, released their debut album 'The Big Black & The Blue' in 2010, which began to bring the band to prominence, but it was their 2012 follow-up 'The Lion's Roar' that really put the sister duo on the map due to its commercial and critical acclaim. Their forthcoming third album 'Stay Gold' expected in 2014 will certainlly sky-rocket the group to worldwide fame.

The two-piece have been celebrated from music's best and brightest from fellow musicians like Jack White, Conor Oberst (Bright Eyes) and Rodriguez to the television personalities such as Conan and David Letterman. Since their formation just a few short years ago the sisters have been awarded the Nordic Music Prize, Grammis awards and numerous Top Single and Top Album nods from worldwide publications.

Come to Gigantic to get tickets for First Aid Kit!