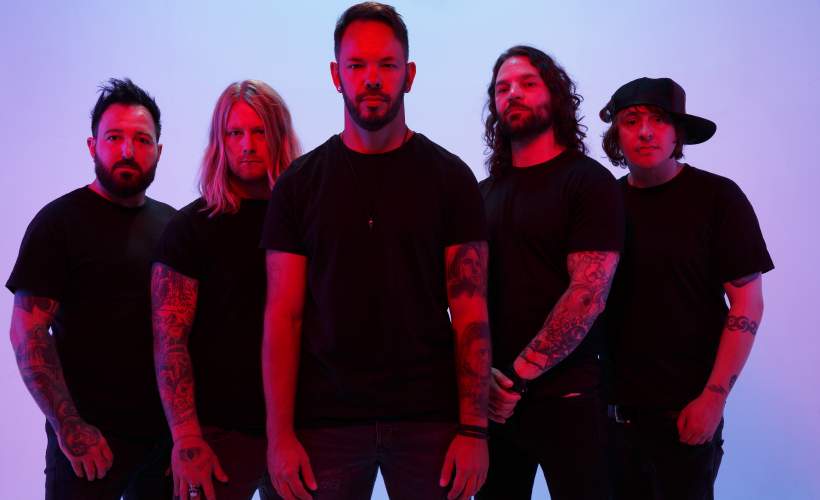 Brilliant venue,3 great bands but especially the Crows,best gig i have ever been to ever,and I have been to lots an lots,still buzzing 2 days later,can't wait to see them again🎶🎸🎤

Absolutely amazing night from start to finish!! The sound was great, the band was awesome! They really interacted with the crowd and were so down to earth!
Throughly enjoyed the night and the atmosphere. I will definitely be going to see them again!!

Tweet
Those Damn Crows will appear at Newcastle Think Tank, The Deaf Institute at Manchester, Bristol Exchange and Boston Music Room in London during February 2020.

Plus, they appear at Planet Rock presents Winter’s End which hits Sandford Holiday Park in Poole from Friday 28th of February to Monday 2nd of March 2020.

In a tattoo studio just off the main street in Bridgend, South Wales, five musicians are plotting the resurrection of rock’n’roll. They’re fanned out on a pair of sofas in the studio’s main room, surrounded by an array of award-winning designs that hang in frames from the walls.

There’s Shane Greenhall, a singer with a powerhouse voice and the quietly determined approach of someone who knows exactly what he wants. There are Ian ‘Shiner’ Thomas and Dave Winchurch, a pair of skate rat guitarists who wear their love of grunge and punk rock on their sleeves. There’s bassist Lloyd Wood, who, with his long hair and tattoo of five crows in flight, looks like he could have stepped out a stoner rock band. And there’s drummer Ronnie Huxford, a man who buzzes with restless energy and voluble sociability. As co-owner of the tattoo studio, this is his turf.

Together, the five of them make up Those Damn Crows, one of the fastest rising new rock bands in the UK. Their debut album, the powerfully anthemic Murder And The Motive, has seen them push ahead of the pack. At a time when British rock is making itself known on the world stage once more, Those Damn Crows are right there in the thick of it.

“Over the last couple of years it’s felt like something’s coming through, that a rock band is on the verge of something big,” says Shane. “That kind of music is coming back - the kind that’s been missing for a long while, the kind of thing that made you want to be in a band in the first place. And that’s what we’re doing.”

“Too many bands these days are almost factory-based,” adds Ronnie. “They’re told they need to do this or look like that to succeed. They’ve been moulded into something else by the people around them. That’s not us. This band is about the freedom and honesty of doing what you want to do.”

This is more than just empty talk. Those Damn Crows draw on a wealth of influences: the undiluted energy of 90s grunge and punk, the arena-scraping ambition of the Foo Fighters, the sheer class of such legendary metal bands as Iron Maiden and Judas Priest.

But they haven’t just stitched those disparate sounds together, Frankenstein-style, and hoped for the best. Instead they’ve cherry picked the best parts of each of their influences and turned them into something new.

“Our influences are so vast,” says Greenhall. “I grew up listening to bands like Green Day, Nirvana and Pantera. But then you dig deeper and go further back and get into Led Zeppelin, AC/DC. We draw from all of them.”

Their South Wales background plays a part in their burgeoning success. Those Damn Crows’ hometown has always punched above its weight musically. In recent years, the tight-knit Bridgend scene has produced big-hitting acts such as Bullet For My Valentine and Funeral For A Friend.

“We went to school with Bullet, so it’s great to see our mates do so well,” says Ronnie. “When you come from a mining town, the thinking is that you get a good job, settle down, have a family, be responsible. They showed that going off and making it as a rock star isn’t impossible.”

“Everybody knows everybody on the scene anyway,” adds Lloyd. “It’s not competitive. The pool is big enough - you look at one band and think, ‘They’re doing that, so we’re going to do this.’”

Shane and Ronnie both come from musical families. The singer’s father was a fixture in the pubs and clubs of South Wales, playing country’n’western to diehard audiences and Shane grew up around music. When the frontman was young, he got a publishing deal to write songs for other people.

“People would say, ‘I want a song in this style, or in that style’, so I’d go away and write something,” says Shane. “It hones your craft. But the music we’re making now is the kind of music I love writing.”

Ronnie’s dad was a professional musician who played with some of the most famous names of the day way back when: Shirley Bassey, Dusty Springfield, PJ Proby. It was Huxford Sr who inadvertently gave the band their name.

“My old man’s 92, he feeds the birds in the back garden,” says Ronnie. “I was talking to him one day and all of sudden he shouted, ‘Those damn crows!’ I thought that would make a cool lyric so I took it to the rest of the guys and they were, like, ‘Nah, that’s a brilliant name for the band.’”

All five of them put in the legwork in a string of different bands before they formed Those Damn Crows in 2014. They had made all the mistakes young musicians are supposed to make: bad decisions, naïve compromises, the kind of demoralising setbacks that can make you or break you as a band and as a person.

“I basically quit music after for a while,” admits Ronnie of his past travails. “I’d been through all these bands who were so hungry for success, and I was so ambitious personally. And then it just didn’t happen. I just though, ‘Fuck it, that’s me done.’ I couldn’t even look at a drumkit for a long time. That’s when I decided to focus on the tattoo studio. I’d been working here since the mid-00s when I wasn’t touring. Eventually I made an investment in it. Now I own half the business. We do conventions all over the world, win awards.”

Being away from the frontline helped Ronnie rediscover his love of music, and he and Shiner began to sow the seeds for Those Damn Crows. The pair of them had been in countless bands together. They knew that this had to be different. Ambition is fine, but pursuing success for success’ sake at any cost is a recipe for disaster. Instead, they decided to adopt a different set of rules: honesty, enjoyment, freedom to do whatever the hell they want.

Slowly, the band took shape. They knew Lloyd and Dave from the Bridgend scene, while Shane was an old school friend. From the start, Those Damn Crows opted to seize their own destiny and take their future in their hands. Such was their self-belief that they decided to record Murder And The Motive after they’d played only a handful of shows. Funding themselves, they booked themselves into the world-famous Rockfield Studio in Monmouthshire to record it.

Shane: “The songs were there. It felt right. We thought, ‘Let’s go for it. Let’s not waste any more time.’”

Since then, Those Damn Crows have made up for lost time, gigging up and down the country. As well countless shows of their own, they’ve made high-profile appearances at the likes of Camden Rocks, Ramblin’ Man Fair, the Steelhouse Festival and Planet Rock’s Winters End.

“We get everyone at our gigs,” says Dave. “Rock fans, metal heads, punk kids, skaters. It’s a broad church.”

And if that’s not a measure of success, then the fact that a growing stream of Those Damn Crows fans have coming into Ronnie’s studio, asking to be inked, definitely is.

“We’re getting more fans booking in for tattoos,” says the drummer. “And a lot of my clients who are music fans check out the band, so it’s working both ways.”

The path that Those Damn Crows have chosen to take - honesty, freedom, ambition - is paying off. Rock’s new heroes are about to take flight.