The Choir of Man Tickets 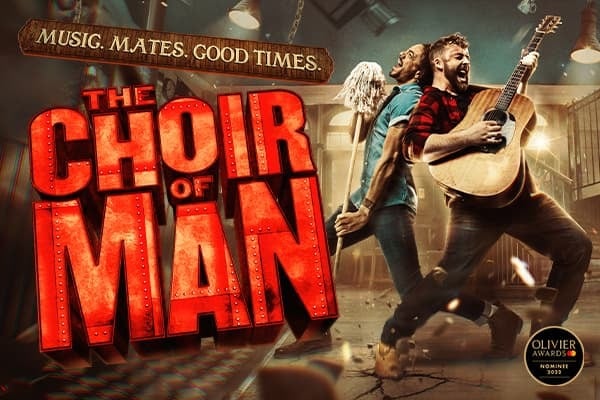 The Choir of Man returns to the West End for a drink at the best pub in the world!

The wordwide smash-hit The Choir of Man is transferring to the West End's Arts Theatre! The show features reinventions of chart topping hits from artists including Guns’N’Roses, Fun!, Adele, Avicii, Paul Simon, Sia and many more performed by a nine-strong cast. Combining beautiful harmonies and foot-stomping singalongs with world-class tap dance and poetic meditations on the power of community The Choir of Man even features a real working bar on stage, so come ready to drink in the action!

Staff will continue to wear a face covering during show times (unless exempt) and patrons are encouraged to do the same.

The Arts Theatre seats 347 in a two-tier basement auditorium. It opened on 20 April 1927 as a members only club for the performance of unlicensed plays, thus avoiding theatre censorship by the Lord Chamberlain's office. It was one of a small number of committed, independent theatre companies, including the Hampstead Everyman, the Gate Theatre Studio and the Q Theatre, which took risks by producing a diverse range of new and experimental plays, or plays that were thought to be commercially non-viable on the West-End stage. The theatrical producer Norman Marshall referred to these as ‘The Other Theatre’ in his 1947 book of the same name.

The Arts Theatre opened with Picnic a revue by Herbert Farjeon, produced by Harold Scott and music by Beverley Nichols. Its first important production was Young Woodley by John Van Druten, staged in 1928, which later transferred to the Savoy Theatre when the Lord Chamberlain's ban was lifted. In 1938 a four week revival of the Stokes brothers' Oscar Wilde, starring Francis L. Sullivan and produced by Ronald Adam, opened on 25 October. This coincided with a Broadway production of the play. In 1942 Alec Clunes and John Hanau took over running of the theatre, and for ten years produced a wide range of plays, winning a reputation as a 'pocket national theatre.'

In August 1955, Peter Hall, aged 24, directed the English-language premiere of Samuel Beckett's Waiting for Godot at the theatre. This was an important turning point in modern theatre for Britain. Subsequently, from 1956 to 1959, Hall ran the Arts Theatre.

From 1967 to 1999, the Arts Theatre also became a home for The Unicorn children's theatre under the direction of its founder Caryl Jenner who took over the lease. Meanwhile adult performances continued in the evening, including Tom Stoppard's satirical double-bill, Dirty Linen and Newfoundland which, opening in June 1976, ran for four years at the Arts.

The Arts Theatre's lease was taken over by a consortium of UK and US producers in 2000, for a five-year period, and relaunched as a West End Theatre with the anniversary production of Julian Mitchell's play Another Country, directed by Stephen Henry. Notable productions during this time included The Vagina Monologues and Closer to Heaven the Jonathan Harvey/Pet Shop Boys Musical.