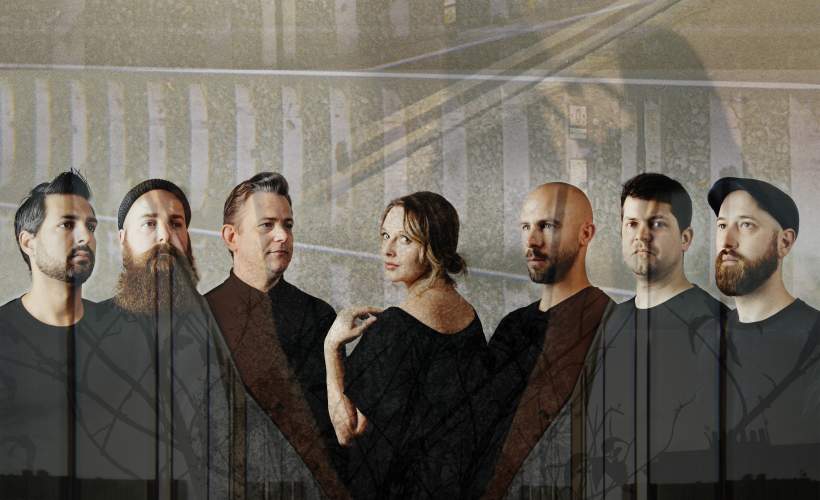 Submotion Orchestra make some of the most interesting and exciting music from the UK today: A kaleidoscope of
electronic bass music, entrancing vocals, ambient, jazz and dub that sits somewhere on an axis between Bonobo and
London Grammar. Their unique music is at once delicate and heavy, spacious and dense, highly atmospheric but
firmly rooted. Earth-shaking bass and drums combine with lush keyboard and trumpet textures to create the perfect
backdrop for the fragile beauty of Ruby Wood’s vocals, and the celestial effects of producer Ruckspin.

Formed in Leeds in 2009, the band quickly made a splash on the wider scene. Their live gigs left audiences openmouthed,
and their debut EP on Ranking Records drew a rave reaction from Gilles Peterson. Their now-legendary
weekly residency at the tiny Hukaz Bar in Leeds gave fans the unique opportunity to see the band create new material
up-close and personal.

Submotion went on to release their first full-length album, Finest Hour. The record became an instant classic, receiving
critical acclaim from around the world, and strong support from DJs such as 6 Music's Mista Jam and Trevor Nelson,
who personally invited the band to record a live Radio 2 session. Sell out tours followed across Europe, and the band
were quickly booked for some of Europe’s biggest festivals, including Glastonbury, Bestival, The Big Chill, Pohoda
and Outlook.

The band's second album Fragments followed in 2012, receiving heated enthusiasm from fans and critics alike for the
variety of its sound. Radio support came from such diverse presenters as Pete Tong, Huey, Lauren Laverne and Don
Letts, demonstrating Submotion’s unique cross-genre appeal. Fragments spent a week at number 1 in the iTunes
charts, and the supporting tour climaxed with a sold out show at London’s legendary venue Koko.

Demand for the band had never been greater, as their reputation for staging one of the most exciting shows around
grew with each appearance they made. 2013 saw them release the 1968 EP on Circus Records, which saw their
champions grow to include i-D, Noisey, and Clash. The band also performed for international fans in France, Poland,
Germany, Turkey, Croatia, and the Netherlands, as well as in the UK. Somehow - perhaps inspired by the whirlwind of
energy around them - they found time to write their third album.

Alium was a dazzlingly eclectic record that showcased every aspect of the band’s myriad talents. Thanks to producer
Ruckspin's deft touch, it also remains a satisfyingly coherent artist statement. Counter Records leapt at the chance to
release it, signing the band in summer 2014. Released that autumn, it garnered fantastic support at radio and superb
reviews, with Mixmag proclaiming it “drenched in sunshine,” and Clash pointing to a band who seem able “stop time,
their uniquely chilled grooves retaining a zen-like peace.”

Off the back of that record, the group toured and performed in ten countries, with highlights including headlining the
6000-capacity Pula ampitheatre at the Outlook festival and a sold-out show at The Forum, as well as other major
European festivals like Pukkelpop and Dour. Their song ‘Perfection’ was sampled for Young Jeezy’s ‘Seen it All’
album, which went to number 2 in the US album charts and they are still receiving radio support for the Kidnap Kid
remix of ‘Swan Song.’ In addition, they recently sold out the Barbican Theatre as part of the London Jazz Festival,
were nominated for Best Live Act at the Bass Music Awards and released the all-instrumental EP III earlier this year.

Anticipation for their new album, Colour Theory, is high, with producer Ruckspin highlighting, their determination “to
try and utilise the technology and post-production creativity at our disposal, and to really push ourselves outside of our
comfort zone.” The results are gorgeous and reflect a band at the height of its powers.