The Orielles // Baby In Vain 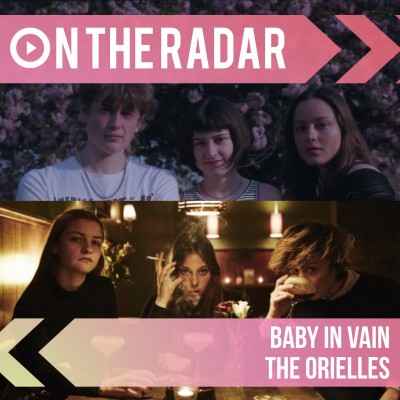 Halifax sisters Sidonie B and Esmé Dee Hand Halford and Henry Carlyle Wade are The Orielles. Having first met at a house party whilst teenagers, they quickly became united through a love of No Wave and Grunge bands plus such pioneering film directors as Quentin Tarantino. Their shared passions were so keen that the trio decided to form the band with a dedication to the DIY approach firmly in mind.

Their sound spans from the dreamy and hypnotic to also include disco grooves and surf pop. Debut single ‘Sugar Taste Like Salt’ shows us a band the confidently strides from a 60’s influenced psychedelia to scratchy post punk laden with bass heavy riffs that cannot fail to get you moving.

Released through the ultimate indie label; Heavenly Records, ‘I Bought It For The Bottle’ is their latest single. From the video showing all the intimate fun of touring the small gig circuit to the efficiently sparse production precisely capturing the guitars as they ring out through a chorus pedal, this song epitomises the LoFi aesthetic leaving us gagging for their debut album. Given Heavenly’s knack for spotting the right act at the right time and giving them the freedom and the appropriate creative support to grow, there is little doubt their first full record will build on this early promise and lead to something truly exciting.

Don’t miss your chance to see them play this Autumn when they hit The Chapel at The Angel Microbrewery in Nottingham and Sticky Mike’s Frog Bar in Brighton during October. Tickets are on sale now and going fast!

The Orielles tickets are currently available.

Drawing on the energy of punk whilst delving headfirst into the driving power of hard rock, Copenhagen based band Baby In Vain are set to become your new favourite band. The Danish post-grunge trio consists of drummer Benedicte Pierleoni with guitarists Lola Hammerich and Andrea Thuesen Johansen who are all in their early 20’s.

This is a band that thrives on playing live, always looking forward to the next opportunity to perform their material at maximum volume in front of their adoring audience. Despite their young age, Baby In Vain first began jamming together over ten years ago and have sharpened their sound to fine precision through constantly performing. Their gigs have seen them being held in high esteem, having been selected to play support by Alison Mosshart for her band The Kills and being highly praised by Thurston Moore whilst they toured with Chelsea Light.

‘Low Life’ is taken from their brand new-album ‘More Nothing’. The girls promise that the new album will be one of the most exciting guitar based albums of this year, focusing on creating something heavy, hard and unrelenting.

“When they hear the album, I want people to feel that they are being punched in their gut by rock music” – Benedicte Pierleoni

The record saw the band relocate to Manchester where they worked with producer Rob Ellis at Eve Studios. The creative relationship worked extremely well, with Ellis understanding the band’s direction and having the experience to steer them in the right direction.

“He’d say thing like ‘John Peel would like this song’ or ‘Kurt Cobain would have sung it like that’. He made us feel confident and helped us perform the best we could. It felt like we had something to live up to.” -  Lola Hammerich

‘More Nothing’ is released through Partisan Records on Friday 25th of August. They promote the new material through their accompanying UK autumn tour.