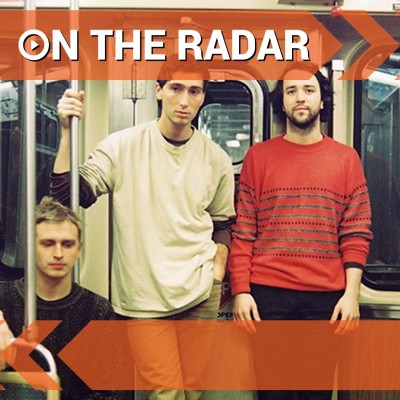 Estrons are the new band you need to hear. They take their name from the Welsh word for “Aliens” as the band feel like a collection of misfits or outsiders. But is perhaps even more apt given the nature of the band centred around Canadian-Swede singer Taliesyn Kallström and guitarist Rhodri Daniel from Wales with other positions in the band kept in flux as they are filled by a procession of strangers.

The band are certainly not shy of making a statement. The lead single from their EP Whoever She Was is titled Make A Man and sees the band explore gender politics. "It’s the story of a heterosexual female’s battle between desiring a man, whilst simultaneously finding herself having little respect for his self-important ego and misogynistic attitude towards women. She retaliates by objectifying him to herself. ” explains singer Källström.

Typically their songs feature a relentless rush of roaring guitars and drums that punch such a frantic pace that it feels like a charging train threatening to be derailed at any second. But the building momentum is never lost making them intensely exciting and their music absolutely satisfying.

Whitney have been quick to establish themselves as something truly special. They have recently signed to Secretly Canadian and their debut album Light Upon The Lake is set for release in June.

The songs are written by the gentle mannered pairing of guitarist Max Kakacek and drummer Julien Ehrlich, the band’s singer, before being introduced to the other four members of the band which may explain the soothing nature of their music. Though only written by two of the members, there are plenty of ideas at play with Ehrlichs curious high pitched vocals conveying a sense of melancholy offset by the use of lush strings, playful use of keys and resplendent trumpets that lend a sense of triumph.

Upbeat yet laden with emotional depth they are sure to continue to develop into something special and their new record will certainly be one for the year’s best releases.

Whitney will be playing in the UK upon the time of their records release in June and then will return to play more dates in November.