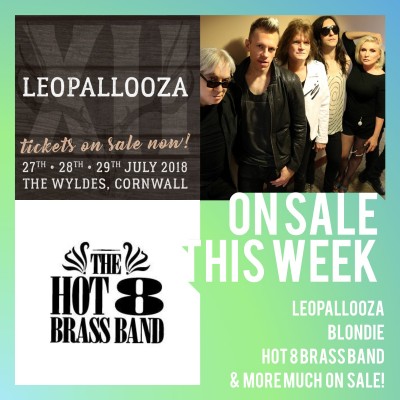 Following an remarkable year at Lower Exe Farm featuring some absolutely incredible acts, Cornish festival Leopallooza has just released Early Bird tickets for what will be another outstanding event for the summer of 2018.

The award-winning festival boasts over one hundred new and established DJs, bands and performing artists taking to seven stages plus so many activities to the beautiful wooded valley close to the coast taking place over three days.

Blondie burst out of the punk scene of New York in the late 70’s to draw influences from reggae, disco, pop and rap to become one of the world’s biggest New Wave acts. Truly iconic, they are a marvel to behold whenever they play.

Catch Debbie Harry, Chris Stein and co. when they head out on an Autumn tour where you can see them play at Nottingham’s Royal Concert Hall, Brighton Centre and Cardiff Motorpoint during November.

Blondie tickets are released at 09:00 on Friday.

Fans of absolutely everything folk should make a bee line for Shrewsbury Folk Festival where they can see a range of classical and contemporary acts. The big celebration encompasses five dedicated venues plus a craft fair, dance hall and events especially for a younger audience.

This year, you can look forward to seeing Loudon Wainwright III, Eric BIBB, Oysterband plus many more when Shrewsbury Folk Festival runs from Friday 25th until Monday 28th of August at West Midlands Showground.

Dark synthpop legends Depeche Mode emerged in the 80’s and have developed a career which has seen them release a staggering 17 Top 10 albums and sell 100 million records, marking them as one of the most important bands still writing and performing.

This year has seen them embark on The Global Spirit Tour, huge headline shows in support of their politically charged album ‘Spirit’ which has proved to be a rallying cry to the disaffected and topped charts around the world.

Hot 8 Brass Band seamlessly blend hip hop, jazz and funk together in their very own inimitable New Orleans brass style. Formed in 1995, they have forged a reputation for being an incredible live act. In addition to the UK shows already on sale, Hot 8 Brass Band tickets for their show at Manchester Academy 2 will be released at 10:00 on Friday 11th of August.

With any upcoming event, we always recommend you set yourself ahead of the rest by setting a personal reminder with Gigantic so you can be directly alerted with a text message or an email as soon as they become available.

Alternative rock trio Mighty Oaks are an international melting pot of influences centred around acoustic folk, creating huge unforgettable anthems. Be sure to catch them on The Higher Place Tour which takes them to O2 Academy Islington in London and The Deaf Institute at Manchester during November. Mighty Oaks tickets are on sale right now.

We are always getting new and exciting tickets at Gigantic so we advise you check our site regularly so you do not miss out. Further events you definitely need to know include:

The newly emerged 2Q Festival pulls together the very best venues of Derby and Lincoln to create a single day event that hosts crucial cutting acts over the many stages. 2Q Festival gives you the chance to see the bands destined to make it big in an intimate setting.

Fans of industrial noise, dark electro and EBM should get themselves to Bradford University Student Union for Infest 2017. The weekend is jam packed with great bands, DJs and producers for you to enjoy.

Infest 2017 tickets are currently on sale.

Taking place at the picturesque coastal town of St. Malo in Brittany, La Route Du Rock offers you a great selection of indie and alternative acts such as PJ Harvey, Interpol and The Jesus And Mary Chain.

Get ready for a good time because hilarious comedian Chris Rock has announced a UK arena tour. The Grammy Award winning funny man has starred in major motion pictures and earned a reputation for being able to shock and delight his audience whenever he takes to the stage for another unmissable stand up show. Catch him when he makes performances at Manchester, Leeds, Nottingham, Glasgow and Birmingham in January of 2018.

Last year saw the release of international hip hop star J. Cole latest album ‘4 Your Eyez Only’. Charting highly across the world, the record sold a staggering 363,000 copies in the first week alone. He takes the new material on tour in the UK this October where you can see him at a stage near you.

Gigantic is always the best place to find all your essential gig tickets in one easily accessible place. Take a look at some of the amazing events we know you will love: