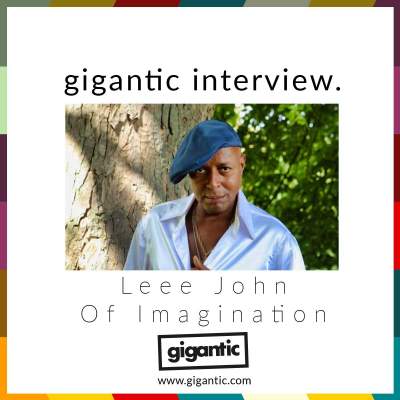 For over 30 years, Leee John has been a leading light in British soul, R&B and jazz. Singer in the world-famous band Imagination, his pioneering career defined the sound of the 80’s and beyond with such hit singles as ‘Body Talk, ‘Just An Illusion’ and ‘Thank You For My Love’ which forever raised him up to become an influence for the generations that have followed. To date, Imagination has sold more than 30 million albums worldwide and achieved Platinum certification.

The Hackney born star is also a keen activist, John start the ‘Do It Right Now’ campaign which addresses the rise of knife crime in London and seeks to address the challenges young people face and inspire them to break the cycle of violence. As part of his actions, John has directing a short film plus teamed up with Neville Stake from The Specials to cover classic reggae song ‘Police and Thieves’ by Jamaican legend Junior Murvin. The modern reworking was included in his critically acclaimed latest LP ‘Retropia’ which saw him return to the classic vibes of Imagination and give them a contemporary twist.

This year, Leee John hits the road once again for The Art Of Love Tour, playing unmissable headline dates in Manchester, Leeds and London – grab your tickets right now from Gigantic HERE.

Plus, we were privileged to talk to Leee John ahead of his unmissable shows about his incredible career, his important campaign work and his advice on how young musicians can follow him on the path of success.

The huge success of Imagination was incredible, with debut album ‘Body Talk’ being a huge critical and commercial success containing three hit singles including the title track, ‘In And Out If Love’ plus ‘Flashback’ which all broke the Top 20. What was it like reaching those heights so early in your career?

To start with my journey started way before the success of the "BODY TALK" album. I was signed at 15 to EMI as part of a duo, we had the top session band in the UK GONZALEZ backing us, and Thunder Thighs who did backgrounds for Lou Reeds ‘Walk on the Wild Side’ and Paul McCartney producer/arranger Del Newman producing us. Our record went nowhere so I learned everything I could about the industry, gigging, acting, writing. So, by the time I met Morgan Khan the A&R that signed me to Red bus records I was well ripened to the music scene.

By the time Imagination broke with ‘Body Talk’ and the other hits the work truly began and it always looked easy watching it on TV (TOP of The Tops the music program of the time) but it was a lot of work , promotion , recording , flying back and forth to different countries.  As there were no mobiles, fax, computers as part of our everyday use as there were all in the infancy stage. We were in a pure Analog state of being, in the raw in the real and we loved it. Body talk had the support from the DJs as a white label vinyl was pressed up with no name of the group just the title and all the DJs went crazy. All thinking that we were an American group, I have always had since then, a strong bond with DJs who always support my music.

What was it like working with legendary producer Tony Swain?

When I met Tony Swain, he worked part time on the MUPPET TV show, as well as creating music. After the record company lost the master of "Got To Be Good " which was supposed to be the first single, Tony swain handed a rough copy of a piece of music, I took it home and on my mother’s kitchen table wrote the melody and lyrics to our first hit ‘Body Talk’. Tony even today is the same as when I met him in 1980, a warm kind, comedic, tea biscuit eating, human being. A genuine music genius, who always gave me space to create vocally and lyrically.

Imagination went on to have a tremendous run, with albums ‘Body Talk’, ‘In The Heat Of The Night’, ‘Night Dubbing’ and ‘Scandalous’ all reaching Gold certification. What is the secret to writing a classic record?

I’m sure many writers who have had success all feel that every record they wrote is a hit. We didn't have any special formula, we knew we had a sound and what worked for it. We would right song by song which all became hit singles as well as the albums. But the main thing in writing is to convey your own truth, so the listener believes every word sung and the melody is strong enough to remember forever.

What can you tell us about the music you are current working on?

I have always had eclectic taste in style, my music and constantly search and educate myself with new platforms. I love jazz, reggae, soul, funk, soca, hip hop, classical. I love to dance, and I love to sing and try to combine all elements in my music.

My 'Do it Right Now' campaign enables those who feel that they CAN'T do it, they are bullied, they feel less of themselves, they need support , sometimes it’s to look within oneself and find that energy of inspiration laying dormant. Instead of waiting for someone else to find it, to tell you, to push you, why don’t you "DO IT RIGHT NOW " don’t wait for tomorrow do it today.

The Police and Thieves film was about the elders of the community talking about their life journeys the changes in today’s community. Also, a message to the youth how to keep uplifted and motivated. This was something I felt needed to be captured and shown, to youngsters all over the UK, which it is now being done.

Do you have ambitions to direct in the future and are there any other films you are currently working on?

I have been working on Flashback the history of UK black music for the last 8 years over 100 interviews and over 600 plus hours, it captures black British music from the turn of the century till today.  I have been interviewing and captured many great stories of many great artists, DJs, producers, contributors to British black music. Check: www.flashbackprojectuk.com

Also working on a short film on the island of ST LUCIA where my parents are from, recently I performed at the 'ROOTS and SOUL" festival and did a short film. I have already produced and directed 3 films for SOS children orphans in South Africa, Zambia and Tunisia which I'm a patron for over 20 years. I intend to be behind and in front of the camera even more in the future.

You have some very special shows coming up later in the year. What songs can we expect to hear when you play in May?

All the hits and more. Watch out my band is the best in the UK.

Do you still get the same buzz walking out on stage like you did in the beginning?

Every show I do is like important to me, as every audience is different, it’s like starting from the beginning, I love the interaction with the audience, it’s a musical natural high.

What has been the secret to your longevity?

I’m too busy living it doing it loving it and maintaining it, every day is a new day a fresh mind a new spirit, I try to capture a sense of the youth of my soul and embellish it in my being.

What advice have you got for people just starting out?

Learn as much as you can, the secrets of the music industry are in the present but are supported by the music of the past, as you uncover the layers of  music through time, you will find the origins that are the roots of today’s music. Never stop learning, keep educating and you must fail sometimes and not be angry but to understand to succeed is both relevant to be able to sustain. Stay POSITIVE.