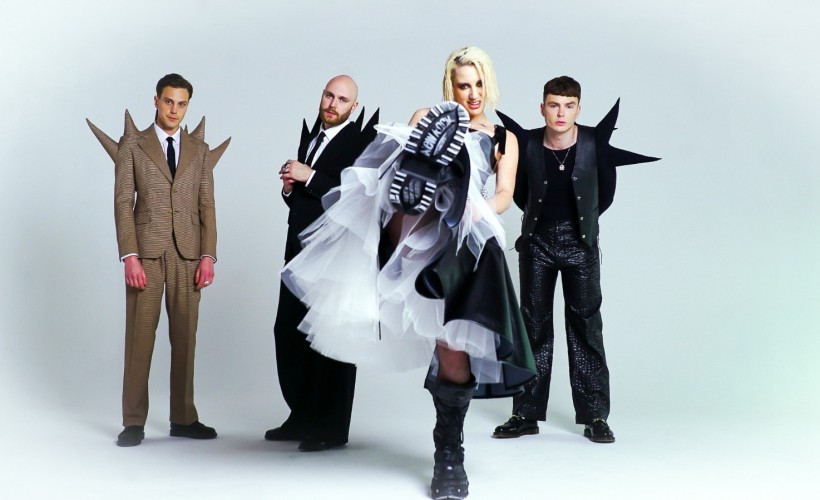 YONAKA are the Brighton band who combine hard hitting ferocity with heartfelt emotion, fusing them with a bright alt pop feel to create a fresh rock sound for the new generation. Including singer Theresa Jarvis, bassist Alex Crosby, guitarist George Werbrouck-Edwards and with Rob Mason on drums – the quartet are renowned for their fiery live performances who never fail to impress.

In 2019, they dropped their acclaimed debut album Don’t Wait Till Tomorrow which set alight the internet, burning up the charts and hitting an incredible 58 million streams on Spotify whilst receiving tremendous praise from NME, CLASH, The Guardian plus securing them a truly hardcore fan base who pack out every venue whenever they play.

Last summer saw the launch of their “Seize The Power” mixtape which saw YONAKA team up with such huge names as Jason Butler (Fever 333) and Barns Courtney – then later supporting Bring Me The Horizon.

This month sees YONAKA kick off the new year with their biggest ever headline tour in support of their “Seize The Power” mixtape, playing unmissable dates across January and February – tickets on sale with Gigantic HERE.

We caught up with the band to chat to them about their unmissable upcoming shows, their relationship with their fans, the influences on their work plus the possibility of hearing new songs - very soon!

Last year saw the release of your hit single “Seize the Power” – what inspired your awesome anthem of empowerment?

Theresa                “It’s about taking back the power and realising who you are. Feeling comfortable within yourself and just going for it. Because I was stuck in this place where I was feeling really shit, jealous of everything else in the world and just not into it at all.”

“So, that song is just about taking back the power and being you and being proud of who you are and taking what you want.”

And what sort of reaction do you get when you play it live? Do your fans really get into it?

“But it feels so good to play because you get all these different feelings with it. Before it’s just strong, punchy DUN DUN DUN! Then it’s soft, and punchy and soft. And then it goes to this chaotic bit at the end and it’s really fun to play.”

And how excited are you to be getting back on stage in ‘22?

Theresa                “We did the tour with Nothing But Thieves this year. I think we did five little festivals spots, something like that. Maybe five, probably? We’ve got one more show this weekend which is Sonic Wave and then of course we’ve got our own tour next year, which we are absolutely buzzing about.”

“Because it's, it's just, it's just so different when you do your own shows, like, we love supporting other bands. And it's amazing, cuz you get to like, pay to all their fans, and you get to gain new fans. When you play to your own fans it's just, it's like, you're just like a like, you just feel like lifted or something,  it's just an amazing feeling and we haven't done... We did our own show. We did one of our own shows this year with Signature Brewery and it was just like a 200 cap. And it was my favourite show of the year because you've just got your creatures and you've just like, it's just sick. So yeah, we’re very excited.”

Did your hardcore fans go mad at such an intimate gig?

Theresa                “Super sweaty. And the stage actually was tiny. Because we like to move around on stage as well. And we were very much like literally like this just like, just like doing your arm movements and tiny little bloop bloops bloops. Yeah, sick. And I can't wait for us to do all it again.”

Speaking about doing it all over again. What can we expect from your future shows in January and February?

Theresa                “Yeah, I think what 10 dates? I just cannot wait. We're going to start going into production stuff at the beginning of January. And this will be this will be my like, biggest tour so far as well. And just like just a lot of fucking brilliant rage and love. And yeah, I can't wait. I think we might be playing a couple new songs as well.”

So, new songs on your biggest tour yet – does that mean there is a second album on the way?

“We'll be playing mixtape, because obviously, that we haven't been able to do that yet. So, it will predominantly be kind of like a “Seize The Power” kind of tour so we can show off the new songs. But also, we'll be paying like stuff from the album as well. And yeah, hopefully, maybe drop like a little new song in there”

Any hints of the sound or the other direction you guys are going in?

What have you guys been listening to for inspiration?

Alex                      “Just a couple of days ago, I started listening to a band called Deafheaven. Amazing, it's like, it's a mixture of like, shoegazey sort of stuff and black metal. Gave me goosebumps first time I heard it. I put it on the other day.”

And is that going to directly effect the music you’re making?

Theresa                “It’s hard. You're always picking up art from art. Right? But I think, we don't do it consciously. But I don't think you know, unless we go into a song and I go “I want it to sound like Justin Timberlake “Cry Me A River” or something like that, you know. It’s a very natural thing. I think sometimes we'll pick things up and put and just… but what's nice about that as well as actually because one person will maybe pick like a style from something that they've heard, but no one else will understand that at the time. So, it's like, you can kind of pull it into like a new direction.”

You were saying earlier that you're going to be at Sonic Wave and you've got a good reputation of being this fantastic festival band as well shining at your own headline shows. Which are your favourite festivals that you've played at in the past? And which ones would you like to play?

Theresa                “Great festival. Yeah, also we were supposed to do this festival with the current Capital One like a few years ago, we couldn't do it cuz we were on tour with Bring Me (The Horizon) and now I'm just dying for us to do it. And probably my favourite festival I've been to, one of my favourite festivals was Primavera. That's just amazing. Like the vibe is just bang. It's just like, that's it. So good.”

“And also, this is what I'm dying to do when we release new songs, more music videos!

Some bands complain that they find the process of making a video boring, or that they think it distracts from the music.

“And like visually, like art – I love art so fucking much and it's so inspiring. It needs to be there, there needs to be some magic to look at as well.

Which music videos leap out at you, that you love or consider iconic?

Theresa                “Yeah, there’s loads. I used to love this video, and I watched it again the other day and I realised it’s just not good. So, this is like my teenage video and I was like “This is so amazing”; Christina Milian and “Dip It Low” but when I was like 12 or whatever it was like (screeching) “OH MY GOD!” I remember this video being so good let’s watch it, and it was very not good. So, not that one.”

Would you be ever tempted to take your videos further? Make a feature length story or a sequence of videos that become a film or something like?

Theresa                “Love to. Absolutely love to. It's just money though, we’ve got to have the money because it's expensive… that's kind of what’s stopped us from doing that on the Mixtape. That's why we were only able to do one. So yeah, I would absolutely love to do that. So yeah, hopefully that's something we could do in the future.

Cool. And have you got any messages to your fans that are looking to buy tickets and looking forward to the gigs coming up next year?

“Just make sure you get your tickets if you haven't already because it's gonna be wild!”

Get your YONAKA tickets with Gigantic!