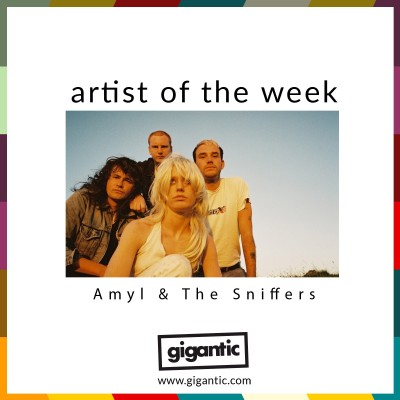 Riotous Aussie garage punk rockers Amyl & The Sniffers shot to attention with their ferocious live performances then solidify their reputation as true stars with the release of their ARIA Award winning self-titled debut album.

Having been named in just about every album of the year listings worth reading with latest LP Comfort To Me, Amyl & The Sniffers now head back to the U.K. for a scorching summer tour – tickets on sale with Gigantic HERE!

In 2018 they dropped their eponymously titled debut album which saw their name spread right across the globe, helped in no small part by intense appearances at The Great Escape and SXSW plus their now legendary U.K. tour!

The following year, they won the ARIA (Australian Recording Industry Association) Award for Best Rock Album – proving their status as the most vital band of now.

Easy one for the best albums of 2021, Amyl & The Sniffers followed up with second LP Comfort To Me. Written amidst the chaos of COVID, the band took the opportunity to use the time to really work on their music and expand their sound to include a wider range of influences, including AC/DC, Motörhead and Cosmic Psychos.

“I had all this energy inside of me and nowhere to put it, because I couldn’t perform, and it had a hectic effect on my brain. My brain evolved and warped and my way of thinking about the world completely changed.” – Amy Taylor

The result is a riotous record with real depth, which they take on the road this summer. Grab tickets to see Amyl & The Sniffers with Gigantic and look forward to witnessing one of the most exciting bands currently tearing up stages and smashing it at every festival slot.