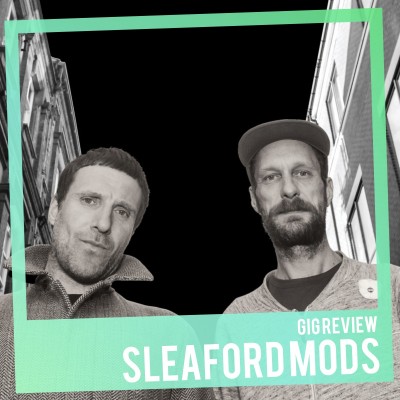 Much has been made of the music of foul mouthed embittered partnership Sleaford Mods. Is it hip hop, stripped down post punk or aggressive electronic spoken word? Whatever it is its certainly working. Jason Williamson (the one with the microphone) and Andrew Fearn (the one behind the laptop always with a Stella) now seem to be a permanent fixture in all the right music magazines, enjoying praise from just about everyone including original wild child Iggy Pop and with the release of new album English Tapas their faces now adorn the sides of buses around Nottingham. Sleaford Mods signed to Rough Trade in 2016, a label closely associated with signing brave choices which invariably prove to be correct, and tonight the latest cult band showcase the new material at the store in their hometown.

The thing about cult bands is that they invariably have real cults spring up around them with all the many different types odd acolytes they bring with them. The audience is made up of your proper punks with mandatory mohawk, the parka wearing pageboy cuts who have clearly zoomed in on the mod bit of their name, those that maybe get to a few gigs a year when its something special and an assortment of various trendy types.

Perhaps the odd mix of fans is apt for a band(?) that stands alone in terms of sound, remaining resolutely undefinable. By drawing on so many influences they have tapped into the few remain subcultures that have survived the homogenising effect the internet has had on music which has resulted in the creation of many temporary scenes but very few actual cultures. Don’t believe me? When was the last time we had any clearly defined youth movements that came and made a difference, one that people gleefully adhere to long after it has any real relevance and lasted so long your granny could point at a kid in the street and say “That’s a hippy”. Flip it around, everyone hates a hipster and yet no two people can give the same description of what one is. And this is key to Sleaford Mods appeal; identity.

The very name of the new album references a jocular sign Fearn saw outside a pub selling half a scotch egg, a mini pork pie, pickle and that new scourge to good taste; a ‘cup’ of chips. It taps into that feeling of being cheated. Nationalism is always a con, trying to unite different classes, communities, ethnicities and more under one flag but to ignore the shared experience of living on the same island would be a mistake. Sleaford Mods point out the modern life is crap and that at every point, from the decisions being made behind closed doors at Whitehall to the food on offer on the street corner, we are being given an ersatz excuse. They show us that Britain is essentially a bad joke.

But that isn’t to say the songs are overtly intellectual. All too often Williamson is unwittingly held up as the voice of an alienated generation bound down by zero hour contracts and service subscriptions. I say unwitting as he is often keen to play down this mantle in every interview and it isn't really true anyway. In the absence of any other act saying anything at all, writing songs calling UKIP wankers while getting off your head makes you Proudhon or Chuck D or something.

Entry was only guaranteed had you bought the new record instore and the free wristbands were quickly snatched up so by the time they do make their appearance the slightly awkwardly placed stage is already packed. A nervous energy is generated in the audience by prospect of being placed so close to the performers which explodes at their moment of arrival. From the second Fearn presses play on the laptop there is a small frenzy of flailing arms raised pints and pogoing as fans get to grips with the new songs with most just about learning the chorus to Army Nights by the time its finished.

Halfway through the set a couple of blokes start heckling from the front apparently feeling the need to take advantage of the immediate proximately between themselves and the performers to say which songs they don’t like the endings to and what was wrong with everything they have just done as it happens.  Is this the inevitable backlash or it is just two pissed morons at the front? I've heard complaints from those who remain unimpressed by Sleaford Mods who dislike a man ranting over a badly programmed drum machine stating its just more of the same, showing themselves up as a one trick pony.  I, on the other hand, am struck by their relentless creative output. There was the T.C.R. EP release not so long ago, a live album just last year plus their breakthrough record Key Markets which made them BBC 6 music regulars in 2015 not to mention an extensive back catalogue of ten years of work.

The new songs maintain the LoFi sound and unfocused boozed up rage for which they’re famed and show no sign of diminishing in terms of power or appeal. The attendee’s enthusiasm to the recently released tracks is expressed by continued rampant dancing, including the previously mentioned moaning pair who are the first to jump at the start of every song.

I can’t help grin at the mod revivalist screaming “He’s got a moptop!” Is he aware that the very same meagre insult could be levelled at him? Is he directing his anger at some character known only to him or is he channelling the anger of the inevitable shout outs in the street from the dull and boring for being brave enough to sport a distinct style? Does it matter? He’s certainly having a great time and I’m not about to stop and ask him right now because next song has already started.

The set accelerates towards the end with a rousing rendition of BHS and surprisingly not Tied Up In Nottz. But then, the art of putting on a good show is to give the public what the need and not necessarily what they would expect. Jobseeker is then added as an apology at the last minute because of earlier mic problems. A good nature over enthusiastic fan steps onto the humble stage to treat us all to some sort of dance. She is joined by a handful more before the performing area is now littered by a mob of gleeful goons, myself included, screaming along to every word. And then Jason is off, exiting via the back door leaving Andrew to shake the many hands protruded at him. Later the pair setup camp behind the DJ booth where they sign CDs and LPs and become the star attraction in many selfies for fans that cannot wait for more of the same later in the year.