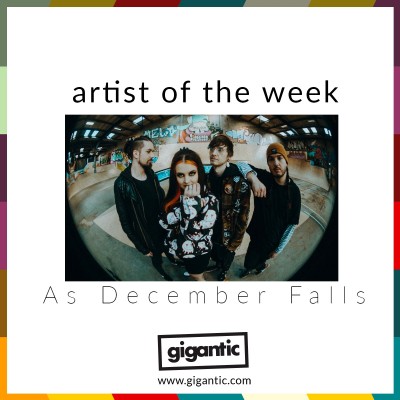 Nottingham based rockers As December Falls draw on pop punk as they take the spirit of independence to the next level, self-releasing their infectious eponymous debut album and their passionate second record Happier.

Led by singer Beth Curtis, the band members include guitarists Timmy Francis and Ande Hunter, with Lukas James on drums.

“Yeah, we can’t wait. This band has always been about ‘how do we write songs to promote our tours’ essentially. We always think of how we can change things and make it work live.” – Ande Hunter

Doing it their own way has always been at the heart of As December Falls’ ethos. The group teamed up with producer Arthur Welwyn (Busted, Emma Blackery, Fightstar) who recorded their first eponymously titled album in his Mum’s garage on an aging iMac, reflecting a fresh and young band who were excited to first be on stage.

Taking DIY to heart, the band remained true to their independent spirit and organised their own tour in support of their first full length; selling out 90% of the shows they booked themselves.

Always ambitious, they came back just two years later with second album Happier self-released, of course, and funded independently via a bank loan and fan support rather than accepting the many label offers made available to them. This time round, the band brought in more mature themes as they began to develop stylistically.

“For sure, it may be an unapologetic rock album, but some of the themes made me feel pretty vulnerable letting others see a different side to me. A big difference to singing about bars and being broke like on the first album!” – Beth Curtis

Again, they organised their own promotional tour which totally sold out. Plus made appearances at 2000Trees, Rock For People, Slam Dunk, Teddy Rocks – proving themselves as a vital addition to any festival ready to rock!

Now As December Falls, drop new single “Go Away”! Euphoric and energetic, it reveals the group at their confident best and ready to take on the world.

Don’t miss your chance to see this awesome band as they rise; As December Falls will be touring throughout October before returning to Nottingham to play a huge homecoming show. Book your ticket with Gigantic now and look forward to a truly mind-blowing show!

As December Falls tickets are available with Gigantic.